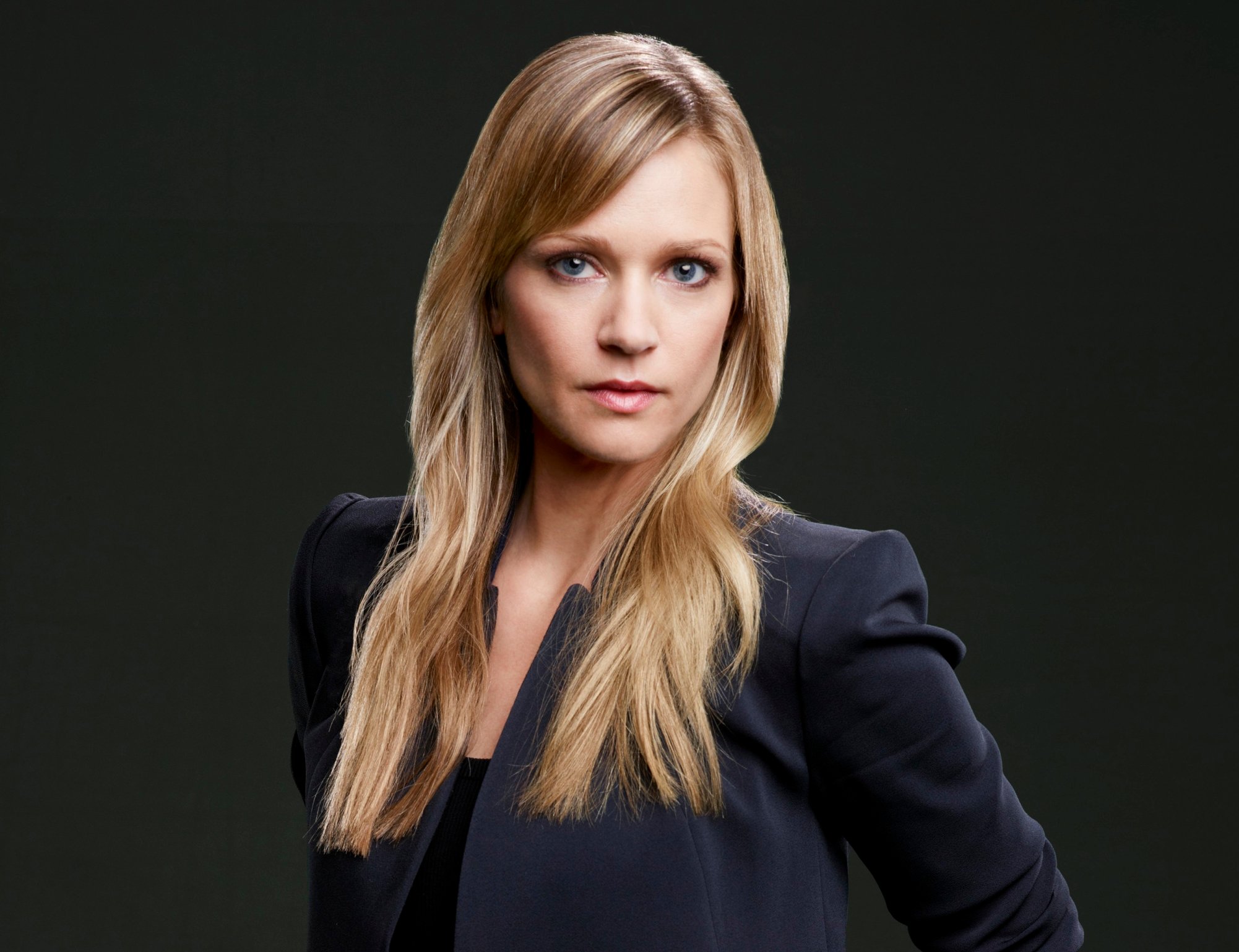 A.J. Cook and Josh Stewart play husband and wife on Criminal Minds, so it isn’t too surprising that when Stewart obtained funding for his passion project, Back Fork, he invited Cook to play his wife again — and she didn’t have to think twice before saying, yes.

“It’s definitely a departure from #Wilifer,” Cook tells Parade.com in this exclusive interview. “It’s not your Criminal Minds that’s for sure. But I love that he and I have a really great chemistry and trust for one another, so, of course, he could ask me to do anything and I’d probably say, ‘Yes.’ He’s just such a pleasure to be around and it was great to see him as a director, to see him put on that hat and to see his passion for this project, because this is a passion project for him for sure.”

Back Fork is the story of an everyman, Waylon (Stewart), struggling to hold his life and family together after a heartbreaking tragedy. He and his wife, Nida (Cook), barely recognize themselves, let alone each other. Their inability to continue on and to heal, leaves them hopeless.

I looked to see if Josh had directed any Criminal Minds episodes, but I don’t see any credits for that, so what was it like to work with him as a director on this?

It was fantastic. He’s such an easy soul. He’s just the epitome of cool, calm and collected. Still waters run deep, I think, really describes Josh well. I’m kind of the same way. I’m calm and quiet at times, so we just pull out the best in each other, I think. But to see him as a director, he was exactly what I knew he was going to be.

He’s just going to be Josh and he’s authentic. He really pulled great performances out of me because he knows me well, and he just created a really safe, nurturing environment. For a director trying to get something out of their actors, there’s no better way, so it was fantastic to be able to see him in that light.

In an interview he did for this film, he said that the character he wrote as his wife is full of qualities that you possess. What do you think those are?

I think what has happened here with this couple in this movie is there is never a question that they love each other, you don’t question that. Unfortunately, their love has been clouded and convoluted with complications in life: addiction and grief. If you’re both going down, it’s hard for one to reach out and help the other out. I think we see that happen a lot in life in people that are thrown into these impossible situations. They’re just doing their best, and there’s no handbook for that specific situation.

I think what he maybe saw in Nida that he saw in me was that undying love and the very loyal person. I protect my own, I protect my people, and I think he saw that in me and in the character Nida.

Josh’s seen me grow up, too, on Criminal Minds and there’s definitely a journey within my life and within the character Nida. In that first scene, we’re all happy and it’s beautiful and loving. You see the fun life that these people have and then, you hit some bumps in the road and that can change people and it can harden them. Experience is a brutal teacher, but my God do you learn, it’s that famous quote. So, I think he just saw that strength maybe in the both of us.

Criminal Minds to End With Season 15: See the Cast Through the Years

Criminal Minds is filmed here in L.A., but this was filmed in West Virginia, why was it important to film there?

Josh is from West Virginia. He has this love affair with West Virginia and he should. It was so great shooting there and it was important to him to be in that environment, and be in that place, so it’s all authentic and we’re telling a truthful story.

Of course. I come from a very heavy, like independent background. Doing this movie with Josh really brought me back to what felt like my roots. I started out in The Virgin Suicides, Sofia Coppola’s first indie, and that’s where I feel like I thrive. For me, it’s this weird cathartic therapy session. That’s why I’m so well adjusted in real life, because I get all that stuff out with all of my characters. It’s a love of mine. It’s this weird love, but I would, obviously, love to widen my reach and try new things, but I don’t consider myself a comedian by any means.

I talked to Matthew Gray Gubler for his book Rumple Buttercup. So, I know you are finishing the 15th and final season of Criminal Minds right now. What’s it going to be like to say goodbye?

It’s not a place I’m willing to let my mind go yet, you know? There’s a lot of compartmentalizing going on because we still have the job to do and we’re lucky that we still have this time together. We all just really enjoy each other. The chemistry is 110 percent real. We really enjoy each other and we know what we have is special. We know that lightning is probably not going to strike twice with that kind of chemistry.

So, we’re just savoring it. We’re savoring every last moment and, the closer we get to the end, obviously, the harder it is. As soon as I start letting my mind go there, I’m a mess, because I grew up here. This is my family. My family doesn’t know life without this show either.

It’s really been an amazing journey. To see a character evolve and grow that much is a real gift and something that most people don’t get the opportunity to do. I’m so extremely grateful for that time that we had to see these characters grow up, change, go through the wringer and come out the other side and come out better for it. I’ll be sad to say goodbye to this character because truly she’s like a sister for me and I just feel so protective of her, so it’ll be really hard to say goodbye.

I don’t need to say goodbye to my cast mates, because I know that we’re family and the same with the crew. They’ll always be my family. But there is a little mourning there for these characters that we’ve developed and created, and watched change and grow. So, it’s a double-edged sword right now for sure. People keep talking about the last day and I’m like, “Are you serious?” I hope there’s a lot of emotional scenes in the last episode because we’re probably going to be crying a lot.

The time jump between season 14 and 15 is six months. So, how is JJ doing when we return? Because in the finale where she told Reid [Matthew Gray Gubler] that she loved him, I believed it was the truth and it was really a surprise.

I was surprised, too. You weren’t the only one, and it goes back to how protective I am of my characters, so that storyline that was difficult for me.

Right. Because we all think she’s happily married.

They really had to sit me down and talk me off the ledge a couple of times, because I was like, “What are we doing now?” But I really think how it plays out is so beautiful, more beautiful than we could’ve hoped for because it’s the truth. Its life and it’s complicated. It’s complicated and beautiful and messy and it only makes someone stronger in the end. But getting there is a little scary and that’s what we want our audience to feel, too. We want the audience to go on this journey with these characters. I know it’s this weird thing and I can’t really say much about it. I can say to our fans that I’m right there with you guys. I’m right there. I’m dying to see how it all plays out, too.

Have you thought about what you want to do next?

Yes and no. Because I’m still digesting and processing that like, “Oh, this is ending and I need to start thinking about what’s next.” First and foremost, I need to lose my phone and my computers for a little bit and just go off the grid, hang with my family, and run around in the wilderness and the wild for a bit and reconnect.

But I’m really excited to do a little more directing because that was such an incredible experience and that’s been a lifelong goal for me. So, I’m excited to see that turn into a new challenge. Acting is and always will be my first love, but directing is right up there with it. I’m intrigued by stories like Back Fork that aren’t sugarcoated. It’s just raw. I want to tell a bunch of weird, artsy, independent stories that we don’t get to see every day. That’s my goal.

Back Fork is in select theaters and available on VOD starting today.