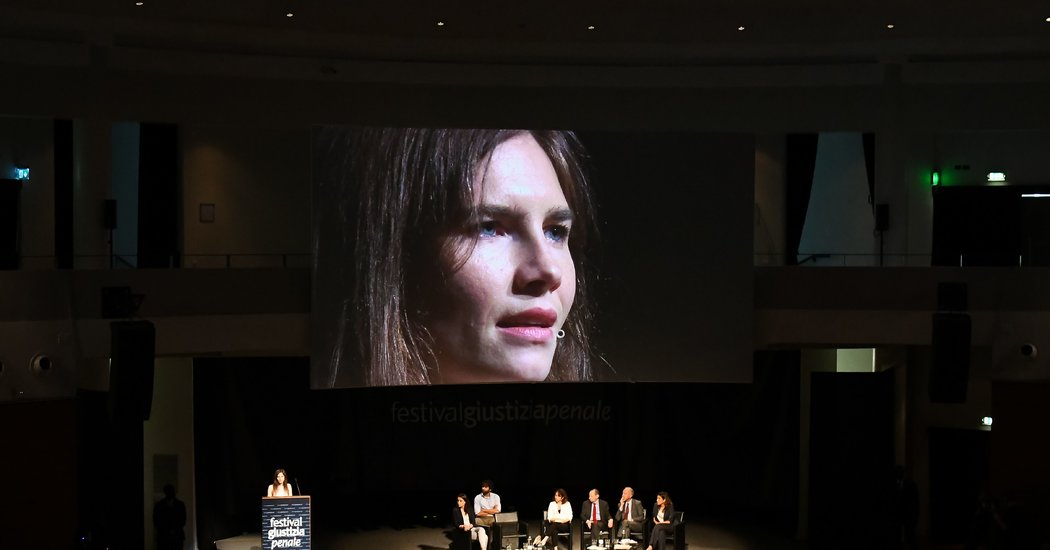 MODENA, Italy — When Amanda Knox, the American whose murder trial had riveted the world, landed at Linate Airport in Milan on Thursday, she immediately engaged in a familiar and uneasy tango with the news media.

Straight-faced and stiff-lipped, Ms. Knox dodged flashbulbs as a coterie of bodyguards kept the press at bay. She had returned to Italy to speak about wrongful convictions in her first trip to the country since 2011, when an appeals court in Perugia acquitted her of the murder of her roommate, the British student Meredith Kercher.

But even as Ms. Knox shunned reporters this past week, a videographer on her team was tracking her every move. And on Saturday, when Ms. Knox finally broke a self-imposed three-day silence at the Festival on Criminal Justice in Modena, in central Italy, she wept.

Ms. Knox told the packed audience that she was afraid “that I will be molested, derided, framed, that new accusations will be directed against me for telling my truth.”

“I know that despite my acquittal I remain a controversial figure for the public opinion, especially in Italy,” she added. “I know that many people think I am bad, that I don’t belong here. It shows how a false narrative can be powerful and undermine justice, especially when amplified by the media.”

Ms. Knox had been introduced by Guido Sola, a lawyer and one of the conference organizers, as an example of someone facing trial by news media, a victim of a “mass media lynching” whose guilt had been decided in the court of public opinion long before she appeared in an actual courtroom.

Her trial was a perfect case study for the conference. She had been accused with her Italian boyfriend at the time, Raffaele Sollecito, and an Ivorian-born acquaintance, Rudy Guede, of murdering Ms. Kercher on Nov. 1, 2007. The case ping-ponged around various Italian courts for years, until the country’s highest court definitively acquitted Ms. Knox and Mr. Sollecito in 2015. Mr. Guede is still serving a 16-year sentence.

At times tearful, at times defiant on Saturday, Ms. Knox recounted her odyssey for nearly an hour, occasionally breaking down, such as while recalling an injustice or a kindness received. She blamed the news media, local and international, for not having dug deeper to reveal the flaws in the prosecution’s case — instead, she said, fueling the frenzy with stories about her purportedly salacious past.

“I was never a defendant, innocent until proven guilty,” she said of the public’s perception. “I was sly, a psychopath, dirty, a slut, guilty until proven otherwise.”

This warped version of her entered into the courtroom, compromising the result of the trial, she said.

The most important lesson she had learned, she said, was that it was easy for the public to distort defendants into monsters. “It’s easy to see what we want to see,” Ms. Knox added, reducing criminal cases to “black and white stories populated by demons and saints.”

The three-day festival was organized by Italy’s Innocence Project and the Criminal Bar Association in Modena to discuss “complicated themes” on criminal justice, said Luca Lupária Donati, a law professor at Tre University in Rome and the founder and director of the Italian Innocence Project. Judges and prosecutors were invited to attend.

Mr. Lupária said in an interview in Rome that the issue of wrongful conviction and miscarriages of justice was especially important “in a moment of populism, where the theme of the death penalty was rearing its head in Europe,” where it does not exist.

Ms. Knox’s case was particularly divisive, stirring passionate debate on her innocence in Italy and the United States. Hordes of news cameras and journalists followed the case as it bounced from court to court. Benedetto Lattanzi and Valentino Maimone, the co-founders of Errorigiudiziari.com, an archive that tracks judicial errors in Italy, said that whenever they posted something about Ms. Knox, she was immediately attacked on social media by Italian haters.

Since her return to the United States, Ms. Knox has been involved with the Innocence Project and has hosted a Facebook series and a podcast on true crime for Sundance on justice issues. At a seminar on Friday in Modena, she hugged fellow exonerees Peter Pringle, who was wrongfully imprisoned on a murder charge in Ireland for 15 years, and Angelo Massaro, who was wrongly imprisoned for 21 years in Italy on a murder charge.

From the dais in a conference center, Mr. Pringle recalled the moment he was released from prison and saw the news media mosh-pit waiting outside “like a bunch of locusts.”

“Amanda, am I right?” he called out to her in the dark auditorium. Her response, if any, was unknown.

In the afternoon, Ms. Knox watched a 2016 documentary, “Non Voltarti Indietro,” about five Italians who were wrongfully detained, and the devastating impact it had on their lives. In the discussion afterward, speaking in slightly accented but very good Italian, Ms. Knox joked with one of the five exonerees, Lucia Fiumberti, about jailhouse superstitions.

Ms. Knox nodded her head knowingly when another exoneree, Antonio Lattanzi, remembered putting all his belongings in the plain garbage bags provided by the prison when he was set free.

The festival touched on a number of legal and forensic questions, but focused on the chilling leitmotif: This could happen to you.

“Immediately, we’re like brothers; you are part of a worldwide fellowship of exonerees,” Mr. Pringle said.

The media plays a fundamental role in forging public opinion about such cases, experts say. A white paper for the Italian criminal lawyer’s association found that 82 percent of news coverage of criminal cases “favor the prosecution thesis,” Mr. Maimone said. Television mock-ups of high-profile cases and true-crime shows “pass the idea that anyone can judge a trial,” even if they do not have the facts of the case, he added.

In the United States, audience-pleasers like the podcast “Serial” and the Netflix documentary “Making a Murderer” have shined a light on the issue. Time magazine published a special edition on wrongful convictions, placing it “at the checkout counter, as though it were a Marylin Monroe cover,” said a conference participant, Mark A. Godsey, a professor at the University of Cincinnati College of Law and an authority on wrongful convictions, who directs the Ohio Innocence Project.

In her prepared speech, Ms. Knox said that she was grateful that her innocence had been ultimately acknowledged.

But she added that she hoped to one day meet Giuliano Mignini, the prosecutor who had put her behind bars, so that he could see her as a person and not a defendant.

“I hope he will see that I am not a monster, simply Amanda,” she said.

At the end, the audience gave her a standing ovation.