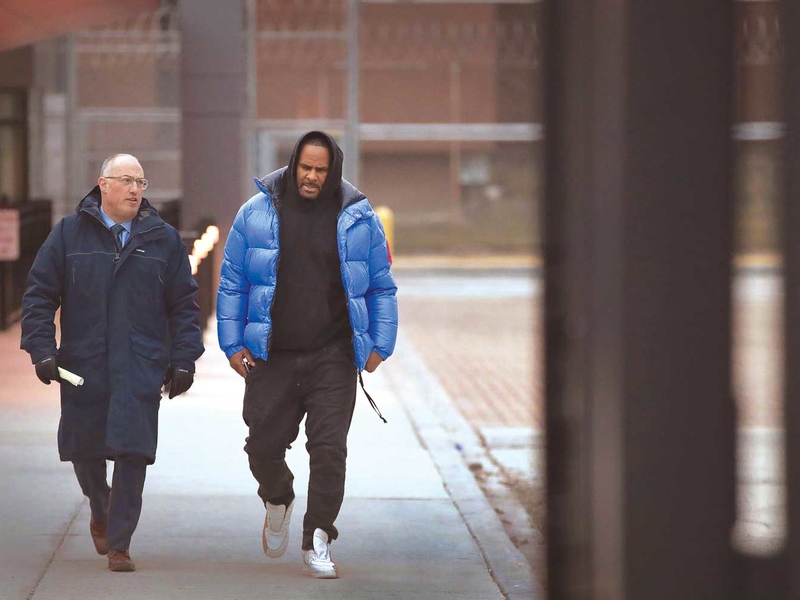 Steve Greenberg is sitting at a Cosi in the Loop, eating his first meal of the day, a cup of turkey chili, at 4 one recent afternoon. His phone sits on a stack of manila folders. It dings and dings and dings. Greenberg looks at the screen and impatiently slides the phone away. “These fucking people,” he says. The dings are texts from women who want to get in touch with R. Kelly. “Girls send me pictures,” Greenberg says. ” ‘Hey man, tell R. Kelly I’m in his corner.’ “

Greenberg, a criminal defense attorney, has defended Drew Peterson, the Bolingbrook cop serving a 38-year prison sentence for killing his third wife; and Brian Dugan, serving a life sentence for the kidnapping, rape and murder of 11-year-old Jeanine Nicarico. Now he’s representing Kelly, the Chicago-based R&B singer facing 10 charges of criminal sexual assault involving four women, three of whom were underage. Greenberg met Kelly last summer through someone doing work for the singer. “He and I actually had the discussion that I was going to help if there was litigation in those matters,” Greenberg says, glancing at the dinging phone every few seconds. “And then this all started to fester.”

Greenberg, 58, is one of a rare breed of criminal defense attorney who represents people accused of violent crimes.

The Highland Park native, a divorced father of three, says he always wanted to be a criminal defense lawyer. He witnessed the reality of defending people accused of awful crimes while working in the Cook County state’s attorney’s office during law school. “I was kind of shocked by the inhumanity of the system,” says Greenberg, whose gravelly voice has an oddly comforting timbre. “The callousness of people toward each other and how things were just summarily disposed of so quickly.”

Greenberg says doing what he does requires the ability to focus on the process, not the person or his alleged crime. “You can’t be judgmental,” he says. “It’s not our role to fight crime or make sure people who’ve done bad things go to jail.” Only once did a client acquitted of a serious offense commit another crime; Greenberg declined to represent him for a second time.

If and when that happens, “I would certainly feel bad; I’m human,” he says. “But if you let yourself get invested in the outcome of the case, and what that person does with their life—you can’t do it.” He sometimes has post-trial pep talks with clients: “You caught a break here; make the most of it.” That said, “I’m not a life counselor,” he says.

“The greatest rush in the business is when you know someone is guilty and you win the case,” Greenberg continues. “The worst feeling is when you lose a case and you really think the person is innocent.”

He describes his work as part skill, part theater, fortified with more than a bit of ego. “You have to be confident to stand up in front of a bunch of people and argue many times what’s an extraordinarily difficult position with a straight face,” he says.

A good memory comes in handy, too, as Illinois does not permit depositions in criminal cases. Attorneys have material gathered during investigations, and might have a summary of what a witness told a police officer, but occasionally, what they hear from the witness stand is the first time they’re hearing it. The process requires the ability to listen to information, absorb and synthesize it, and turn it into probing questions. “And you can’t seem shocked, you can’t seem startled,” Greenberg says. “It takes a lot of concentration, but it’s so fun,” he adds, likening a normal workday, no two alike, to an episode of “Law & Order.”

He has turned down clients because they didn’t get along or he thought they’d be high maintenance. Only one prospective client, charged with a triple murder, has ever scared Greenberg, after he commanded the lawyer to win his case. Greenberg declined to represent him.

“A lot of what we do and see is dark,” says Tony Thedford, past president of the Illinois Association of Criminal Defense Attorneys, who estimates that only about 100 private attorneys in the state defend people accused of rape, murder and other violent crimes. “Criminal defense attorneys are seen as the bad guys, the ones in cahoots with the client,” he says. In defending accused murderers and rapists, “we are driven by a fear,” he says. “If we don’t do everything we can do, the consequences to our clients might be our fault.”

For Greenberg, a win means only one thing: His client is acquitted and goes home. He says that he won six jury trials in a row last year; he rattles off a list of a half-dozen clients acquitted of murder whose cases didn’t make headlines. Among the headline-making cases, his success rate is mixed. Peterson, whom Greenberg represented with attorney Joel Brodsky, was convicted. Greenberg represented Dugan for his sentencing; Dugan received the death sentence, which was commuted to life in prison after Illinois abolished the death penalty. In September, a judge vacated the 2018 conviction of Gaege Bethune, tried for the 2014 murder of a fellow Southern Illinois University student; Greenberg became Bethune’s lawyer after the conviction but before sentencing. Greenberg helped overturn the conviction of Arnold Day, accused of murder in 1994. (A judge ruled that Day was tortured into confessing at the hands of Chicago police under the command of former Cmdr. Jon Burge.) In a civil case, Greenberg represented the family of Darius Pinex, who was killed by Chicago police in 2011, in a wrongful-death lawsuit filed against the city. The family won.

Greenberg “has a reputation as being an aggressive advocate for his clients,” Thedford says. “He’s a good lawyer.” Not everyone agrees. Stormy Daniels’ lawyer Michael Avenatti, who has said he is representing one of the people named in R. Kelly’s criminal charges, recently got into a Twitter spat with Greenberg, calling him a “hack criminal lawyer.”

Greenberg grew up in Highland Park. His mother co-owned an art gallery in Wilmette, and his father was a CPA. Greenberg says that as a kid, he constantly got into trouble. “He was definitely strong-willed,” says his sister, Michelle Rapaport. “He didn’t back down easily.” As an adult, he is “funny, loyal to his family and friends, and likes to have a good time,” Rapaport says. “And he works really hard. The kind of student he was, I wouldn’t have pictured him as hardworking as he is as an adult.”

After earning a degree in finance from Indiana University-Bloomington, he headed west with the idea of attending law school and eventually settling in California. His grades weren’t good enough for any of California’s state schools, so he returned to the Midwest to attend law school at Northern Illinois University. He graduated in 1986 and opened his own practice in 1988.

Greenberg says he handles 100 or so cases at a time. His business card, made of thick plastic, has the heft of a credit card. He charges a flat rate, or not, depending on clients’ situations. He says the mother of an accused drug dealer charged with murder told Greenberg she couldn’t retire as a hotel housekeeper until she paid him in full. He says he told her to retire. “I make enough money,” says Greenberg, who owns a Maserati convertible, an Audi and a Prius. “We’re not hungry at my house.” He has a home in Highland Park and an apartment in University Village. For fun, he travels the world—Europe, Asia, the Middle East—to eat, drink and absorb the culture. In nice weather, he hangs out at Tavern on Rush “to people-watch.”

Even though he describes his job as packing “an extraordinarily high level of stress,” he doesn’t plan to retire anytime soon. “It’s just too much fun, it’s too interesting,” he says. Meanwhile, an unsentimental view of his work helps him cope, and helps him win. “My job is not to hug you, to babysit you or hold your hand except as necessary to get you through the process,” he says. “I have my job, and I’m going to stay in my lane. Right? That’s what I’m going to do.”