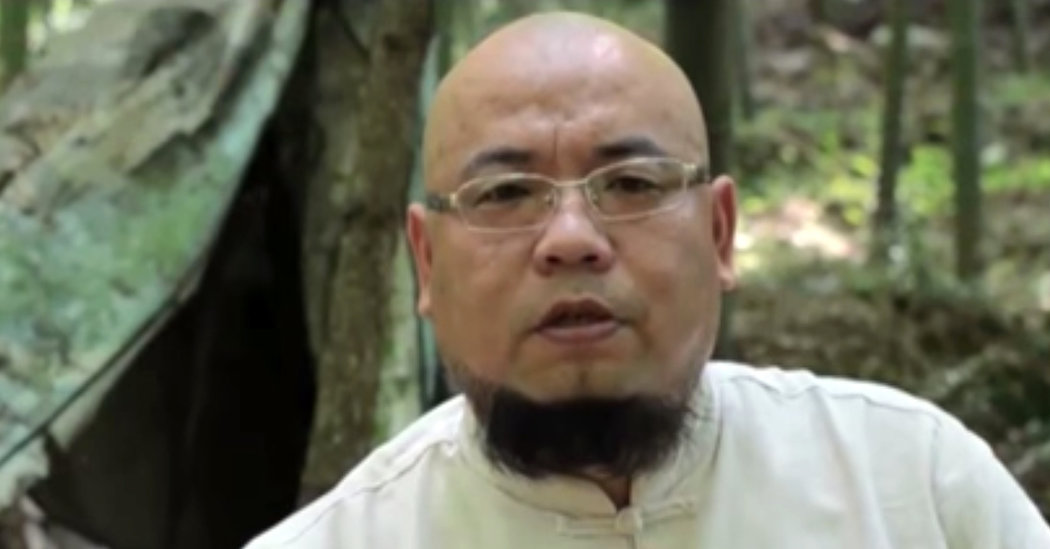 BEIJING — A Chinese human rights activist who went by the online name “Super Vulgar Butcher” and made public shaming of officials a raucous art form was sent to prison for eight years after a court declared him guilty of subversion on Tuesday after an earlier, secretive trial.

The activist, whose real name is Wu Gan, became renowned among rights advocates for helping organize boisterous protests outside courthouses and government offices to support plaintiffs and defendants who accused officials of abusing their power. Mr. Wu, easily recognized by his shaven head and goatee, relied on social media, a wide and fluid network of online supporters and abrasive mockery to spread his message.

The verdict underlined how under President Xi Jinping, determined activists like Mr. Wu, who once survived at the edges of official tolerance, have come under concerted attack from the police, prosecutors and courts, with the state news media often acting as a cheerleader.

The court in Tianjin, a port city near Beijing, where Mr. Wu was tried and convicted, said that he had “used ‘rights defense’ and ‘performance art’ as a ploy” to “seriously harm national security and social stability,” said an official summary of the verdict.

“For a long time, Wu Gan used the internet to disseminate voluminous statements attacking state power and the constitutionally established state order, and he promoted the idea of ‘toppling the wall’ through subversion of state power,” the court said.

Government officials put a tight lid on Mr. Wu’s trial, which was held more than four months ago. Protesters were warned against turning up, and Mr. Wu’s supporters and Western diplomats who went to the courthouse were enveloped by the police and security guards in plain clothes, according to human rights groups monitoring the trial.

Days before the trial, Mr. Wu issued a statement saying that he would not speak during the hearing and predicting that he would receive a heavy sentence for refusing to go along with a show trial.

“I will never regret what I have done and the choices I have made up to now,” Mr. Wu said in the pretrial statement that human rights groups shared online.

He wrote: “I will be convicted not because I’m really guilty, but because I refused to accept a state-designated lawyer, would not plead guilty and go along with media propaganda, and insisted on exposing their savagery in torturing and abusing me, as well as the prosecutors’ cover-ups and dereliction of office.”

The Tianjin Second Intermediate People’s Court, where Mr. Wu stood trial, said he had “acknowledged that he had violated the criminal law.” But the court’s brief summary did not say Mr. Wu had pleaded guilty, and it noted that his lawyers disputed the prosecution’s case. Mr. Wu’s defense lawyers, Yan Xin and Ge Yongxi, refused to comment after the trial.

In addition to the eight-year prison sentence, Mr. Wu was deprived of his political rights for five years. In handing down the verdict, the court said Mr. Wu attacked state power, promoted subversion and colluded with illegal religion practitioners, vilified others on the internet and spread rumors in the name of “safeguarding rights.”

The court said the case involved state secrets, meaning that the trial was even more restricted than usual, and the state security police held his father, Xu Xiaoshun, in his hometown in the eastern province of Fujian, according to a Twitter account that has issued statements from Mr. Xu.

Mr. Wu, 45, was among 250 or more people detained in a sweeping clampdown of outspoken lawyers and rights activists that began in 2015, and he was among the last detainees from that roundup waiting to stand trial. Many of the detainees were released in days or weeks, but the government arrested and indicted a core group, mostly linked with the Fengrui Law Firm in Beijing, where Mr. Wu worked as an assistant and researcher.

At least eight people caught up in the crackdown have already been sentenced on subversion and other charges, mostly after making televised confessions and recanting their previous political stances. Wang Quanzhang, a lawyer at Fengrui arrested in that crackdown, is also waiting trial in Tianjin.

Mr. Wu’s brash methods were not universally welcomed by Chinese human rights lawyers. But Mr. Wu argued that vocal, eye-catching actions were essential to force judges and officials to heed the voices of otherwise powerless citizens. He applied that tactic in a succession of cases for nearly a decade, including in a dozen listed in his indictment on a charge of subversion of state power issued in January. It cast him as a rebel under the thrall of anti-China forces abroad.

“The defendant Wu Gan has long been influenced by the infiltration of anti-China forces and he gradually formed his ideas about overthrowing the country’s current political and judicial system,” the indictment said. “From 2010, Wu Gan used the internet to issue his statements about subverting state power, and he incited people who were ignorant of the truth to resist the state.”

But Mr. Wu outlined his strategies for challenging officials in three tracts published online, including one called “A Treasury for Slaughtering Pigs.”

“What leaders fear most of all is losing their jobs, so don’t stick to doing things that don’t make them feel pain, itching and fear,” Mr. Wu wrote. “Do whatever it is they’re most afraid of, but this doesn’t mean using illegal means or violence. It’s taking every action that citizens are permitted within the law.”

Mr. Wu, a former soldier and airport security guard, first drew widespread attention in 2009, when he defended Deng Yujiao, a 21-year-old hotel worker in central China who fatally stabbed an official who tried to assault her. In a torrent of blog posts, Mr. Wu helped stir nationwide anger that Ms. Deng was being charged with murder, and she was later freed after being convicted of a lesser charge, assault.

Mr. Wu was detained by the police in May 2015, when he was holding a protest vigil in front of a court in southeast China, after judges refused to give lawyers access to documents about the disputed conviction of four men for raping and killing a woman.

But Mr. Wu knew for years that the authorities might close in on him. In 2012, he made a video saying that if he was arrested, he would appoint his own lawyers.

“It’s dangerous to take on these cases in China,” he said. “First, I declare that I won’t commit suicide. Second, I’ve always stayed within the law and didn’t engage in any illegal activities.”