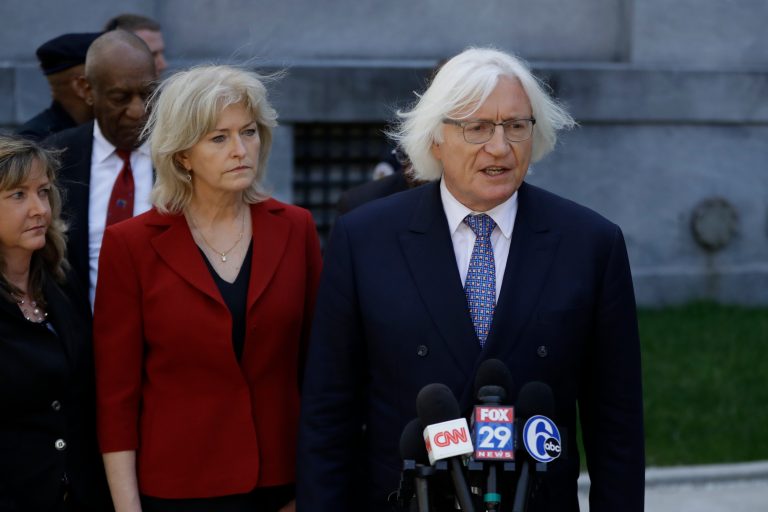 As Bill Cosby awaits his sentencing date, one big question is brewing: What are the entertainer’s best grounds to appeal his conviction?

Under Pennsylvania law, Cosby will not be able to start appealing until after Montgomery County judge Steven O’Neill hands down his punishment. But once O’Neill does so, one line of attack is expected to center of Cosby’s Fifth Amendment right against self-incrimination.

Steele thanked all of those individuals who helped make the prosecution of Cosby possible and he also gave a shout-out to a document that prompted investigators to peruse the criminal charges: a deposition Cosby sat for as part of a civil case with accuser Andrea Constand.

A federal judge unsealed portions of that previously-confidential interview, an act that, according to Steele, “got us to the point where we were able to reopen this case and seek justice.”

In the deposition, Cosby admitted to obtaining the now-banned sedative quaaludes in the 1970s to give to young women before sex. He discussed encounters with Constand, and shed light on his view of consent, when he said under oath that during one episode with Constand he went in the area “somewhere between permission and rejection.”

Those explosive statements were heard by the jury and factored into their decision to find him guilty of three sexual assault felonies: drugging Constand, violating her while she was unconscious and violating her without her consent.

Cosby, 80, who has been ordered to be confined to his Cheltenham home, wearing a GPS ankle bracelet until his sentencing hearing, could face decades behind bars.

“Why would he have given statements under oath in a civil deposition if he didn’t believe there was no chance of criminal prosecution?” asked longtime Philadelphia criminal defense lawyer Bill Brennan, who is not involved in the Cosby case. “I think not only is it a basis for an appeal but I think it’s the strongest argument for bail pending appeal.”

Did he think those statements could be used against him, or didn’t he? That is in dispute. Yet one thing is clear: Cosby’s lawyers think it was unfair for the judge to allow the statements read to the jury of seven men and five women who found Cosby guilty. Cosby’s defense team fought to suppress them. But the judge sided with prosecutors, allowed the deposition in as evidence.

Lawyer Matthew Stiegler, who specializes in appeals, said that when United States District Judge Eduardo Robreno made portions of the deposition public, it did not mean it should be automatically be accepted as evidence in Cosby’s criminal trial in state court.

“The fact that a federal court unsealed it doesn’t answer the question of whether it was proper to admit it in this case,” Stiegler said. “I think this is likely an appealable issue.”

Philadelphia civil lawyer Mark Tanner is less convinced the self-incrimination appeal will gain traction. The issue was unsuccessfully raised by Cosby’s former defense team before the first trial. Back then, Cosby’s lawyers argued that filing criminal charges against Cosby broke a promise made by former Montgomery County District Attorney Bruce Castor, who announced by press release that he would not charge Cosby, indicating in the 2005 announcement that resolving the dispute in civil court would be the better option from Constand.

Yet the agreement never obtained a judge’s approval. Instead, the promise was brokered verbally. That’s important, Tanner said.

“I think the defense has a real uphill battle,” Tanner said. “The prosecution’s argument that this alleged agreement was unenforceable and did not afford Cosby immunity from prosecution is the better argument.”

Tanner said Castor and Cosby’s attorneys probably recognized that seeking judicial approval of such a promise would generate considerable public scrutiny that could be damaging to both Cosby and Castor.

“And they simply agreed on a stalemate, hoping it would never be tested,” Tanner said.

Members of Bill Cosby’s defense team would not comment about which appeal approaches they are exploring.

Even if Pennsylvania appeals courts decide to entertain a Fifth Amendment challenge, Brennan said if Cosby is not granted bail pending his appeals, no legal argument will get him quickly out of prison, if O’Neill does impose a sentence that includes incarceration.

“It was an interesting question two years ago, when Mr. Cosby was presumed innocent, but he’s a convicted felon now,” Brennan said. “So if he’s incarcerated pending appeal, the court to take a year or longer to decide that.”