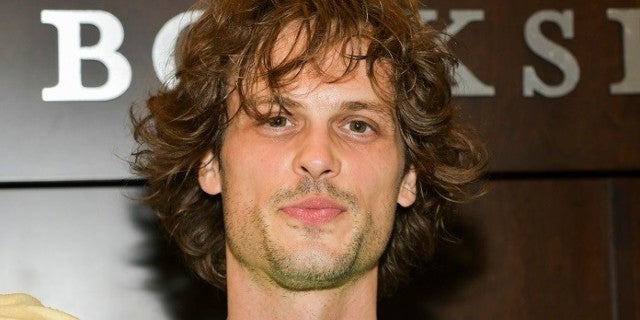 The actor took to Twitter on May 15 to celebrate the CBS police procedural crime drama’s 300th episode. For the occasion, Gubler had shared a photo with the cast and crew which he had captioned with a series of heart emojis.

The actor has starred as supervisory special agent Dr. Spencer Reid since its inception back in 2005.

While plenty of fans were struggling to contain the emotions evoked by the post, many more were simply caught up on the peculiar image of a man in the recycling bin in the background.

Who is hiding in the recycling can? pic.twitter.com/jsZVHR53sd

So we’re ignoring the fact there’s a person in the trash and possibly a velociraptor?

But the man in the recycling bin wasn’t the only eye-catching piece of the photo, as one user even pointed out what appeared to be a man levitating.

The floating guy and the trash can guy ?? pic.twitter.com/y12rmmXpbz

The bit of comedic relief comes as fans prepare for the final run of the beloved drama. In January, the network had announced that Criminal Minds would conclude after its 10-episode 15th season.

“It is the quintessential CBS hit. We are so proud to have aired it,” Amy Reisenbach, CBS’ EVP current programs, said at the time. “It speaks to everything we do best, which is air quality television. It’s been successful not only on air but online, in syndication, internationally for ABC (Studios).”

Although the final season does not yet have a premiere date, it is known that it will break away from its traditional Wednesdays at 10 p.m. ET during the fall timeslot and instead be held for midseason, meaning that fans will have to wait until 2020.

The 10-episode season will bring the series’ total episode count to 325, making it among the Top 20 shows of all time by episode count, with only Gunsmoke, Law & Order, Law & Order: Special Victims Unit, NCIS, and Grey’s Anatomy having longer runs by season among primetime TV dramas.

The first 12 seasons of Criminal Minds are streaming now on Netflix. Check back here for the Season 15 release date on CBS.