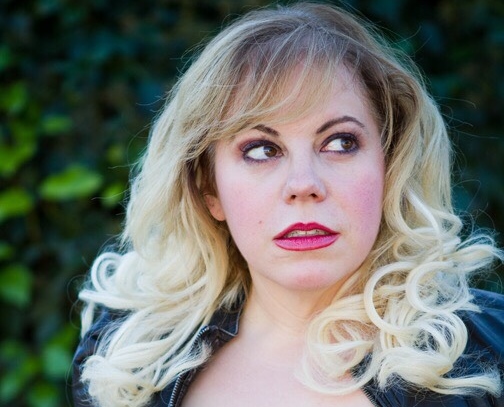 Before Kirsten Vangsness returns as fan favorite, tech-kitten Penelope Garcia on the 14th season of Criminal Minds, she is starring in the dual role of Maid Marian and Robin Hood in Theatre of Note’s gender-bending play Marian, or The True Tale of Robin Hood.

“What I really like about it is it talks about gender identification,” Vangness tells Parade.com in this exclusive interview. “The way that the show presents it is someone says, ‘Hey, I don’t know if I’m a he or a she,’ and everybody goes, ‘What?’ And then they explain themselves and it’s like, ‘Oh, okay. Let’s keep going because those problems are not the big problems in the world.’ Do you know what I mean? We all need to figure out how we choose to identify and then go about the pursuit of our happiness and that’s how the show rolls itself out, which I really appreciate.”

Following is the synopsis:

Marian, or The True Tale of Robin Hood is a gender-bending, patriarchy smashing, hilarious new take on the classic Robin Hood myth. In [author] Adam Szymkowicz’s retelling of the tale, Robin Hood is (and has always been) Maid Marian in disguise, and leads a motley group of Merry Men (a few of whom are actually men) against the greedy Prince John. As the poor get poorer and the rich get richer, who will stand for the vulnerable if not Robin? What is the cost of revealing your true self in a time of trouble? Modern concerns and romantic entanglements clash on the battlefield and on the ramparts of Nottingham Castle. A play about selfishness and selflessness and love deferred and the fight. Always the fight. The fight must go on.

Even before she joined the cast of Criminal Minds, theater was an important part of Vangsness’s life. She talks about that, how she wasn’t first choice for the role of Maid Marian, learning to use a sword, the jeopardy that Penelope Garcia is in when Criminal Minds returns, and more.

What was it that captured your attention that made you want to take on the role of Marian?

I belong to a theater company in Hollywood called Theatre of NOTE and it was a play that we had picked for the season. I had been in one of the readings, where we just read the play and see if we want to do this show, and I thought it was such a sweet story. It’s a very straightforward retelling of the Robin Hood myth, but it explored gender expression within the mythology and I thought, “I really want to audition for that.”

The director had picked someone else and that person is a wonderful actor and she got another play somewhere else. I was so excited about the play and excited we were doing it, and as an actor you are used to rejection. So, I was like, “Well I guess I didn’t get it,” but I was the second choice. So, when she turned around and told them, “I can’t do it,” I got a phone call saying, “Do you want this part?,” and I was like, “Okay.”

So, I happily did it and what’s been fascinating about it to me is so many things, but one of them is Marian is Maid Marian and she’s also Robin Hood, and as we’ve gone through rehearsal there’s a lot of sword fighting and stage combat. Half the time, I’m in a skirt and batting my eyelashes and the other half of the time, I’m in pants with a broadsword. It’s been super interesting because I saw pictures and some publicity stuff for the show and I had such a strong reaction to looking at my own self doing that because people who look like that, they’re not super heroes.

I’m running around like a super hero, I’m banging around and beating people up and I was like, “Oh, this is exactly what this play is about, it’s about how, if you have curves and you’re a female, you couldn’t possibly do something athletic, but if it was a man, he could be any size and if we see him in a battle with a a weapon his hand, you don’t look at them and go, “Oh, he looks like he’s just a size — fill in the blank. It would be more traditional, casting wise for a show like this, to take a woman that was built like a man and put them in that part because it would be more “believable” for them to be a man.

Are there changes to who Robin is because he is actually Maid Marian?

The way the play is written, Robin Hood’s been taken prisoner and gets some help to escape. Then once he escapes — I have a costume that basically transforms into a skirt — and we take the hat off — we use the conceit of if the hat is on it’s Robin Hood, if it’s off, it’s Marian, and you buy it.

So, it’s done in a really funny way and the way that the story explains itself is that this is a person who really feels like she isn’t living in a world where she can be all the things that she is unless she is both Robin Hood and Maid Marian.

Most of the Merry Men in our production are played by women pretending to be men and there’s love stories happening all over the place. It can get a little confusing because it does explore gender versus sexuality, which are two totally different things that I’ve had to learn stuff about as I’m doing this play.

I think that that’s one of the neatest things about the human existence is you never stop learning. The second you think, “Oh, I know everything there is to know about people and stuff,” that’s dangerous waters. So, I think it’s really fun to keep exploring all these different things.

What was it like learning to stage fight, or was that a skill you already had?

I did not have that skill at all; it was terrifying. I had to basically double my working out to be able to hold a sword one hand and have it look like it’s just an extension of your own arm. It’s very heavy, so it’s no easy feat, but I can do it now without even blinking an eye. I have sword fights with two people, three people at the same time in this play and I love it. Now, I’ve actually gotten pretty darn good at it and again it’s weird for me to see a feminine body fight like that. It’s weird, but that’s what the show explores.

Robin and Marian are British so, do you have an accent?

Yes. I have two accents, actually. I do a Nottingham, which is a northern accent, and then I do proper London accent for Marian. And, also, this I find really fascinating, it’s so easy for me to be Robin Hood. I can do Robin Hood like nobody’s business. For me to do Robin Hood, is so easy. Like, I get it, I can embody him really easily, where it’s really hard for me to do Maid Marian. I question, “Am I being girly enough?” I am a girl, so it’s really strange.

And you’re a girly girl.

Yeah. But I do my femininity in my own way.

Slip into Criminal Minds for just a minute. We have Garcia in jeopardy with the cliffhanger ending, but what’s really interesting about it, it’s not just that she’s in jeopardy, but she shows a completely different side of herself when she says, “Just shoot her, Spencer.”

Where’s that coming from?

As that episode goes on, our season premiere, she and Benjamin Merva (Michael Hogan) have a very intense dislike for each other, and I think it’s hard for Garcia to realize she’s having bad feelings about someone, but she’s also frustrated about the bad things that are happening. It is a very tense episode.

This isn’t the first time Garcia’s been in jeopardy. There was an episode where Morgan (Shemar Moore) had to protect her after she was shot.

Right, but I think the way she processed those traumas was a little different. She definitely comes out of this one with some PTSD. It dfinitely does affect her behavior for at least a few episodes for sure.

So, the season premiere is episode 300. We know that means a lot to you because Criminal Minds pays the bills and allows you to do theater and theater’s a huge part of your life, but what else does it mean to you?

It’s amazing because I was just so happy to get the job for that one day. So, I got a job for a day, I got to put a thing on my resume, and then it got on television so I could prove to people, “Oh, look. I got paid to do the thing I love.”

Now, I get to do it all the time and we’re at 13 seasons. I get to work with people that are so creative, kind and interesting and I’ve learned so much. It’s like television Hogwarts. So, all of that is truly, truly beyond my wildest dreams and it’s very rare, I think, that you get to live your dream, work in a fun place and then on top of all that, there’s like this beautiful, warm, happy, little family cocoon. Usually you have to give something up, right? It’s not a dream job, but there’s security there, or oh, there’s a lot of security, but it’s kind of boring. I am endlessly, endlessly, endlessly, endlessly appreciative of what Criminal Minds has brought to my life.

Will you be co-writing an episode with showrunner Erica Messer this season?

I think so. It’s yet to be determined. I’ve read an interview [with Erica] saying I probably was, so I feel confident telling you I probably am. So, I’m going to say yeah, but right now it’s a little tricky. Since we’re only doing 14, I don’t know exactly where that’s landing and what’s happening. If we end up doing more, then no brainer.

With so many of the cast members directing episodes is that skill you want to take on?

I don’t think I’m built as well for directing, honestly, just processing what everybody else is doing. It’s already a whole hullabaloo when I write a thing and I doubt myself. I feel like in order to be a director … I can lead in certain ways, maybe someday in the future, but not right now.

Marian, or the True Tale of Robin Hood runs through Sept. 23 at the Theatre of Note. Click here for ticket information.