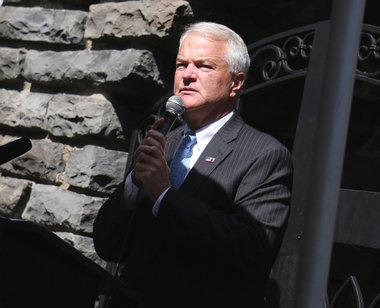 But instead of oaths and recriminations, six veteran criminal defense attorneys gave District Attorney Michael E. McMahon mainly good marks, lauding the newly-minted prosecutor for his seamless transition into the role as the borough’s top elected law enforcement official, his ability to raise money for his office, his no-nonsense approach to gun crimes and his advocating a policy that gives certain first-time drunk-driving offenders a second chance.

“I think he’s handled the learning curve very well,” said Mark J. Fonte, a former prosecutor whose practice is based in St. George. “His transition was smooth and efficient. He’s proved himself a capable and efficient district attorney. I think it was an amazingly smooth transition for someone with no prosecutorial experience.”

Said Mark Geisser, who’s based in West Brighton, “He came into office advocating a very tough stance on guns and drugs, particularly heroin, and he’s certainly fulfilled his campaign promises.”

And on that latter point lies the rub.

Several of the lawyers contend McMahon has pursued a one-size-fits all drug policy, demanding jail sentences for sellers, regardless of whether they’re the top man in the food chain or a low-level dealer peddling small quantities of narcotics to support their habit.

“You can’t have a black-and-white policy that you’re a drug dealer and need to go to jail no matter what the circumstances,” said Mario F. Gallucci, a Willowbrook-based criminal defense lawyer and former prosecutor. “When you have a drug dealer doing drugs to support his habit, that guy needs help.”

“If you’re going to start treating it as a disease, you have to take into account that some people deal drugs because they have a drug habit,” said Lamb.

“People with no prior record have been offered three or four years in drug sales,” added Geisser. “It’s much harder to get people into treatment than in the previous administration.”

In his estimation, McMahon has championed new “programs and efforts” in the criminal justice system that “focus on rehabilitation and not just punishment.”

“I see an effort to rely more on drug treatment and health services to fight substance abuse rather than the cycle of jail,” said Pisciotta. “I anticipate new, innovative methods to address our public-health crisis with opioids that has led to so many overdoses in our community.”

McMahon, for his part, doesn’t apologize for his tough stance on drugs.

While he supports treatment over incarceration in certain cases, he said he’s focused on getting dealers off the street and crippling the supply of drugs into the borough.

As of Dec. 12, there were 85 suspected overdose deaths on Staten Island, compared to 69 confirmed deaths in all of 2015. Authorities believe many more deaths haven’t been reported.

“There can’t be a Staten Islander not touched by it directly or indirectly,” said McMahon. “By cutting off the supply of the drugs we will have an impact, and by getting people who are addicted into treatment faster will have an impact. We’re going to do everything we can to change ‘Heroin Island’ to ‘Hope Island.'”

McMahon shot down talk that sentencing recommendations in drug cases are based solely on number of sales; for example, six years for six sales. He also denied that sentencing in gun cases is based on the number of bullets in the recovered firearm.

He said several factors are considered in drug cases, including the defendant’s criminal history and the weight of the drugs recovered. The number of sales are also evaluated, but are not the sole criteria, he said.

“A lawyer may feel, because of high charges brought against his client, that it’s unfair, but, in my mind, anyone who purveys poisonous drugs will be charged with the highest charges and has to plead to the highest charge,” the D.A. said.

As for gun cases, he said sentencing recommendations depend on the circumstances surrounding the arrest and the defendant’s criminal history, as opposed to bullets in the gun.

On the plus side, McMahon scored high with defense lawyers for advocating a two-step program used in other boroughs that helps certain first-time defendants charged with driving while intoxicated avoid a criminal record.

To be eligible, defendants must have no prior driving-while-intoxicated charges against them and the incident can’t involve an accident or a victim.

Defendants are not permitted to drink alcohol for a period of 90 to 180 days, and must be monitored by an electronic bracelet. They must pay for the monitoring service, as well as a fine, and are subject to having an ignition interlock device put on their car and attend anti-drunk-driving programs.

Defendants who complete the program can have the misdemeanor charge vacated in favor of a noncriminal violation of driving while impaired.

“For the person who’s employed, for the father and mother whose job is on the line, it affords an organized opportunity to avoid a criminal record,” said Joseph Sorrentino, a Castleton Corners-based criminal defense lawyer and former prosecutor.

“It takes some courage for a prosecutor, because you open yourself up to criticism that you’re lenient on crime,” Sorrentino said.

McMahon maintains the program is a way to “extract punishment” yet also “modify behavior in a positive way.”

“We think it’s a way to reduce recidivism, he said.

Gallucci said McMahon has scored big in another area: Finances.

The City Council hiked his budget for the current fiscal year by about $3.6 million, or 37 percent, to around $14 million, according to McMahon.

“He lacked criminal experience, but he did not lack legal experience,” said Gallucci. “He has done a good job of taking his legal experience and political experience to get money for that office. He’s able to cut through the red tape … and generate revenue that past district attorneys haven’t been able to generate.”