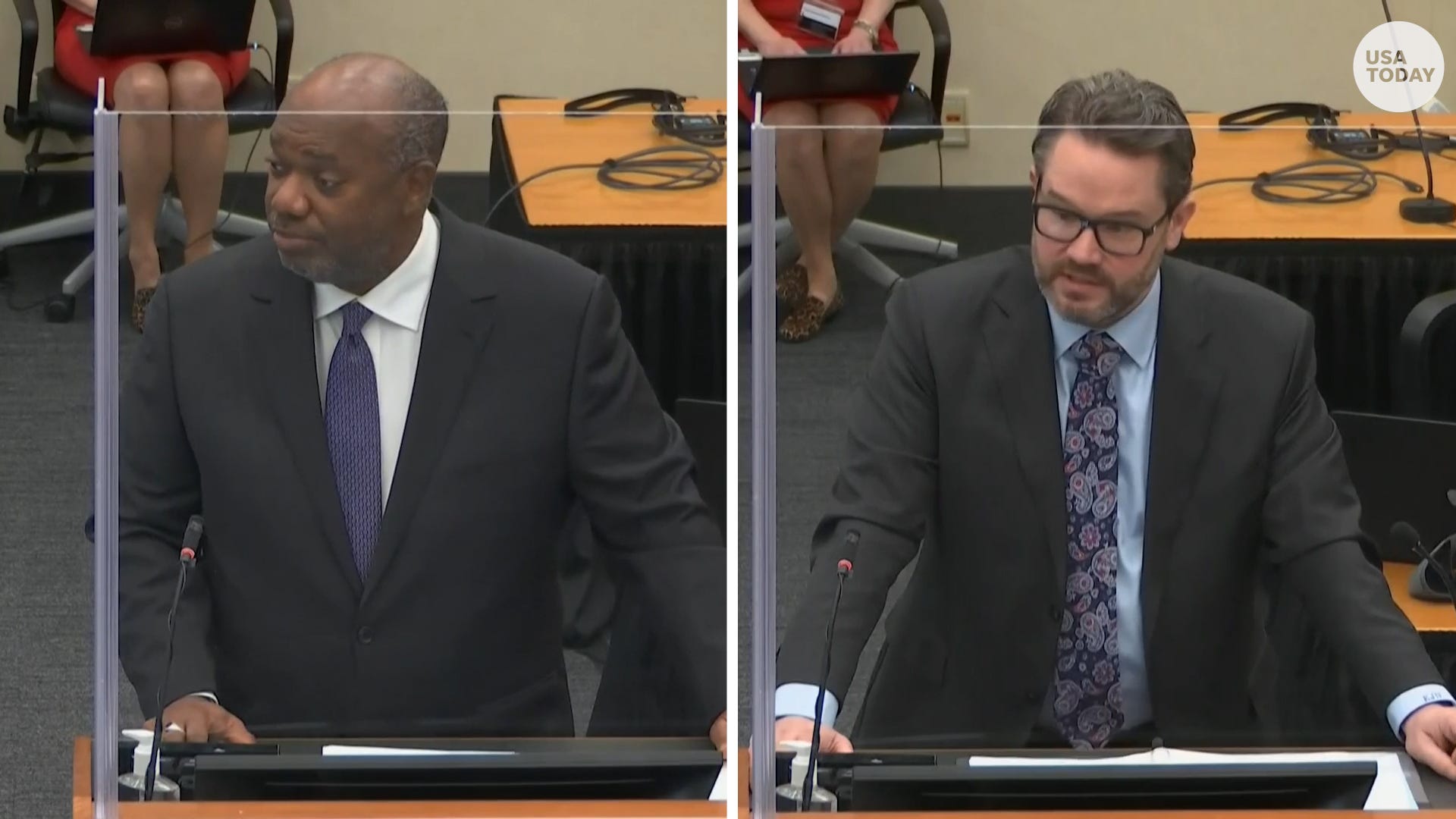 Opening statements began in the trial of former Minneapolis police officer Derek Chauvin, who is charged in George Floyd’s death.

Derek Chauvin’s trial in the death of George Floyd appears to be a match of a lone defense attorney battling a stacked prosecution by the Minnesota Attorney General’s Office with seemingly limitless resources.

Attorney Eric Nelson stands with Chauvin and Amy Voss – whom Nelson describes as his “assistant” but is a licensed attorney – on one side of the courtroom of Judge Peter Cahill. Several feet away, there’s a rotating crew of four state prosecutors, including Minnesota Attorney General Keith Ellison.

Despite appearances, Nelson is hardly working solo. Nelson, a private attorney with the firm Halberg Criminal Defense, has plenty of help from the Minneapolis Police and Peace Officers Association‘s legal defense fund.

The group, Minnesota’s largest federation of officers and unions, is paying for up to a dozen other attorneys working the case behind the scenes, according to MPPOA Executive Director Brian Peters. Nelson has assistance and lots of cash to spend on a trial that is likely to run at least a month, Peters said.

“You know the matchup,” Peters said. “The 12 attorneys on our side work very well together, so it’s not like Eric is doing this case alone.”

The legal fund carries the financial weight, including attorneys’ salaries, despite Chauvin being fired from the Minneapolis Police Department the day after Floyd’s death May 25. The firing came hours after the police chief saw a viral video of Chauvin pressing his knee into Floyd’s neck for more than nine minutes.

In response to Floyd’s death, protests and fiery riots broke out in Minneapolis and across the country over police violence against Black civilians.

Derek Chauvin’s attorney says the murder trial ‘is not about race’: His own line of questioning suggests otherwise.

Facing charges of second- and third-degree murder and second-degree manslaughter, Chauvin could spend 10 to 15 years in prison if convicted as a first-time offender – though a maximum sentence on the most serious charge carries a 40-year term.

“When you’re staring down the barrel of a long prison sentence and you are fighting for your freedom, you know you’re going to take help wherever it’s available,” said Thomas Needham, a Chicago lawyer who has defended police officers accused of misconduct. “Our system says he’s entitled to a defense, and he’s entitled to the best defense that he can afford.”

For some, including Peters, Chauvin is due such a robust defense – particularly from the MPPOA’s legal fund, which Chauvin paid into as a member during his 19-year policing career.

The American Civil Liberties Union agrees, to a degree. But it worries that the appearance of a police organization paying to defend a fired officer – something Peters said Chauvin is entitled to since he was on the job when Floyd died – sends the wrong message.

“Chauvin is certainly entitled to a rigorous defense,” said Somil Trivedi, senior staff attorney at the ACLU’s Criminal Law Reform Project. But “I don’t think the union can simultaneously bring credibility to discussions about meaningful reform and then push … defending Derek Chauvin’s conduct.

“Police unions have have shown their cards, and so I hope that people can see things like what they’re doing in Derek Chauvin’s case and take their opinions on reform with a grain of salt.”

Needham argued that is an unfair take.

“The idea that he is fired and why are they still defending him – that’s all wrong because labor and management are two different sides,” Needham said. “So management decided that he should be fired. But the unions don’t give up and sign on to the management’s decision. In a case like (Chauvin’s), they have to make their own decision about what they do with their resources.”

It’s ‘David against Goliath.‘ Or is it?

Staffing and funding for both sides came up in a tense exchange during jury selection when Cahill – angered that a $27 million civil settlement for the Floyd family had come up again – interrupted prosecutor Steve Schleicher mid-sentence.

Schleicher responded: “I don’t have that number, your honor, but I do know that the police federation, the union, is funding the defendant’s defense.”

Cahill suggested the number of attorneys on the state’s side makes it easier for the state to handle ancillary matters – such as dealing with the news conferences surrounding security for the trial and settlement issues and filing affidavits or motions about those issues.

“The fact (is) that the state has a lot of lawyers on this case, who can sit outside this courtroom and start grinding out things,” Cahill said. “Mr. Nelson does not … have the same level of support.”

A dozen lawyers help with the case, investigation and trial prep. Peters said the MPPOA expects to spend $1 million-plus on Chauvin’s case from the legal fund, which is paid into by officers throughout the state who belong to unions.

The legal defense fund can also be tapped by the three officers charged with aiding and abetting Chauvin in Floyd’s death: Thomas Lane, J. Alexander Kueng and Tou Thao,who face trial together in August.

Who’s working for the state?

Chauvin was initially charged by the Hennepin County Attorney’s Office before Gov. Tim Walz ordered Ellison to take over the case. Not all bills are in, according to the attorney general’s office, but as of Thursday,  the attorney general’s payout was more than $112,572, not counting salaries. Some private attorneys, many high-profile, work pro bono for the prosecution.

Among them are Schleicher, who has presented much of the state’s side during jury selection. Formerly an assistant U.S. attorney, he is a trial and appellate lawyer and a partner at Maslon.

Lead prosecutor Matthew Frank, head of the attorney general’s criminal division, has been with the office for 21 years. He worked as an assistant county attorney and as a public defender – so he knows both sides of the legal equation.

Others include Jerry Blackwell, founding partner of Blackwell Burke. In addition to criminal work, he has litigated complex product liability, tort and commercial disputes; Neal Katyal, partner at the international law firm Hogan Lovells and former acting solicitor general and former principal deputy solicitor general of the United States; and Lola Velázquez-Aguilu, litigation and investigation counsel for Medtronic, as well as a former prosecutor with the U.S. Attorney’s Office in Minnesota.

Chauvin’s case was originally assigned to Tom Kelly, who successfully defended  another Minnesota police officer, Jeronimo Yanez, in the death of Philando Castile.

Castile, 32, was fatally shot in 2016 while in the driver’s seat of a car near the state Capitol. The shooting was caught on video and reached millions of viewers on social media. Yanez was acquitted in 2017, and the Castile family reached a $3 million settlement with the city of St. Anthony, which employed Yanez.

Kelly‘s number was called in the rotation at the MPPOA for Chauvin, but he was expected to retire soon, so the case, according to Peters, went to Nelson.

The other attorneys, who hold full-time jobs but are available to Nelson, are members of the MPPOA’s legal fund.

When news broke that Nelson was taking over the case, some focused on his experience defending people facing charges of driving under the influence. Peters was quick to denounce that definition of Nelson.

“You don’t get on this panel for defending DWI cases. He’s experienced in several murder trials,” Peters said. “And to say that he’s working alone on this is incorrect. He’s got a lot of support behind the scenes; you just may not see it in court every day.”

Eric Ferkenhoff is the Midwest criminal justice reporter for the USA TODAY Network.