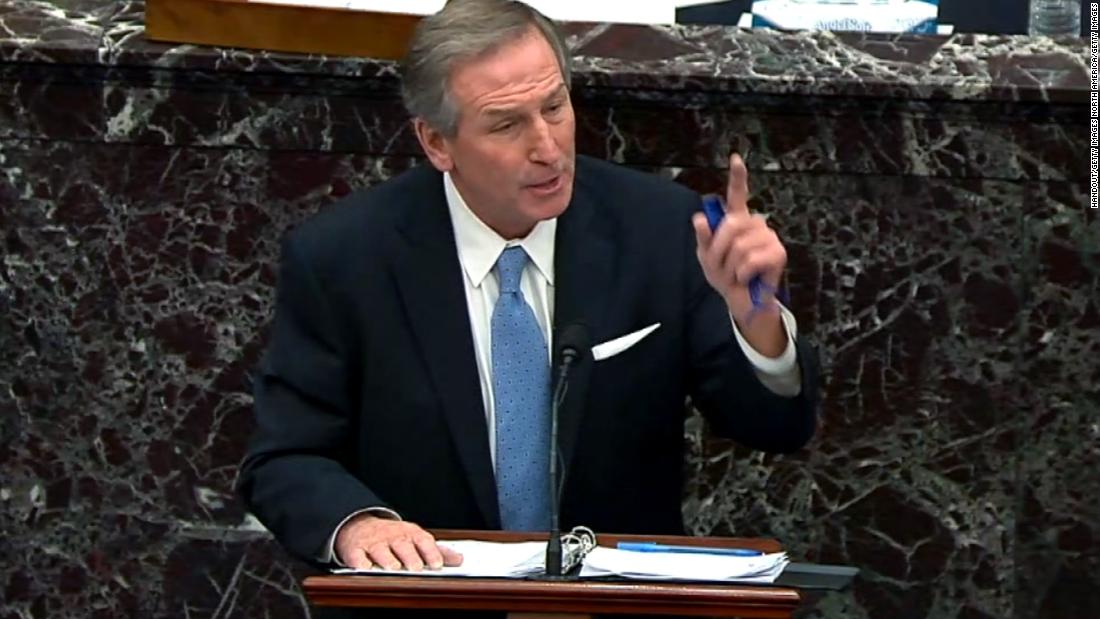 Who perpetrated the insurrection

Van der Veen claimed that the insurrection at the Capitol was “preplanned and premeditated by fringe left and right groups.”
Facts First: This is false: there is no evidence that left-wing groups were involved in planning or participating in the insurrection. Members of right-wing groups, conversely, have been charged with both planning and participating. Though Trump’s legal team has repeatedly attempted to muddy the waters, the evidence shows it was Trump supporters who were overwhelmingly responsible for the attack.
Numerous participants are alleged in court documents to have told the FBI their actions were motivated by their support for Trump — and some have even said they felt they had been directly instructed by Trump to take action. While some alleged participants have idiosyncratic political histories and hard-to-pinpoint ideologies, there is no basis for the suggestion that organized left-wing entities were involved in the insurrection.
It’s also important to note that some of the criminal behavior that day was allegedly planned in advance, but some was not. Only a handful of the 200-plus criminal cases filed to date indicate that rioters had showed up that day with the intention of breaching the Capitol.

Van der Veen said that the House impeachment managers had not shown “a single example of Mr. Trump urging anyone to engage in violence of any kind.”
He then added: “At no point did you hear anything that could ever possibly be construed as Mr. Trump encouraging or sanctioning an insurrection. Senators, you did not hear those tapes because they do not exist.”
Facts First: It is obviously not true that Trump has not made any comments that could even “possibly” be construed as encouraging or sanctioning an insurrection. Multiple alleged insurrectionists or their lawyers have claimed to the FBI or in court that Trump’s words inspired them to action that day.
It’s possible that some of the people who are facing charges are simply trying to shift blame to Trump after the fact. But it is abundantly clear Trump’s words were understood by some listeners as a presidential endorsement of an uprising.

Trump’s words prior to January 6

Van der Veen said: “Mr. Trump did not spend the weeks prior to January 6 inciting violence. He spent those weeks pursuing his election challenge through the court system and other legal procedures, exactly as the Constitution and the Congress prescribed.”
Facts First: This is a highly incomplete account of Trump’s behavior after the election. Rather than simply file lawsuits and await court decisions, Trump mounted a relentless public campaign to convince his supporters of the lie that they had been cheated out of victory. He also urged supporters to come to Washington for a January 6 protest he promised would be “wild.”

Biden, Harris and condemnations of violence

Van der Veen echoed false attacks Trump himself had made in the past, claiming President Joe Biden and Vice President Kamala Harris “repeatedly refused to condemn” acts of violence during riots last year.
Facts First: This is false. Both Biden and Harris condemned riots and violence last year on multiple occasions. They expressed support for peaceful protest.
In August, Biden said, “I want to be very clear about all of this: Rioting is not protesting. Looting is not protesting. Setting fires is not protesting. None of this is protesting. It’s lawlessness, plain and simple. And those who do it should be prosecuted. Violence will not bring change, it will only bring destruction. It’s wrong in every way.”
Harris distinguished between peaceful and violent protest in her own August statement, saying, “We must always defend peaceful protest and peaceful protesters. We should not confuse them with those looting and committing acts of violence.” She added, “We will not let these vigilantes and extremists derail the path to justice.”
In October, Biden and Harris issued a joint statement following the fatal police shooting of Walter Wallace Jr., a Black man in Philadelphia who was carrying a knife during what his family said was a mental health crisis. Biden and Harris said that “no amount of anger at the very real injustices in our society excuses violence” and that “looting is not a protest, it is a crime.”

The timing of the trial

Van der Veen claimed that it was Democrats’ fault that there were constitutional questions about holding an impeachment trial for a president who is no longer in office. He said, “They sat on the article. They could have tried the President while he was still in office if they really believed he was an imminent threat. They didn’t.”
Facts First: It is inaccurate for van der Veen to pin sole blame on the Democrats for the Senate’s decision to hold the trial after Trump left office. Democrats did propose to try Trump while he was still in office; it was Republican Sen. Mitch McConnell, then the majority leader, who rejected the idea, rebuffing Democrats’ suggestion of bringing the Senate back on an emergency basis for a trial before Biden’s inauguration.
McConnell said on January 13, the day the House voted to impeach Trump, that there was no chance a “fair or serious” Senate trial could be completed before the inauguration.

Trump’s past comments about violence

One of the Democratic House impeachment managers, Rep. Madeleine Dean of Pennsylvania, spoke during closing arguments about Trump’s rhetoric before the insurrection.
“Donald Trump knew the people he was inciting. Leading up to January the 6th, he saw the violence they were capable of. He had a pattern and practice of praising and encouraging supporters of violence — never condemning it,” Dean said.
Facts First: It’s true that Trump had a pattern of encouraging or applauding supporters of violence; we listed nine examples in a fact check Friday. But it’s not true that Trump “never” condemned violence or support for violence. Trump has issued repeated condemnations.
Trump was vocal last year in his denunciation of violence connected to racial justice protests and violence allegedly associated with the Antifa movement. In both cases, he was transparent in his efforts to use these incidents as a cudgel against his Democratic opponents.
But he has also condemned violence of other kinds on multiple other occasions. These include an anti-Semitic massacre at a Pittsburgh synagogue in 2018, the mailing of bombs in 2018 to Trump’s political opponents and CNN, mass shootings in Texas and Ohio in 2019, and an anti-Semitic stabbing attack in New York in 2019.
“No nation can succeed that tolerates violence or the threat of violence as a method of political intimidation, coercion, or control. We all know that. Such conduct must be fiercely opposed and firmly prosecuted,” he said in one October 2018 speech in which he discussed the mail bombs.