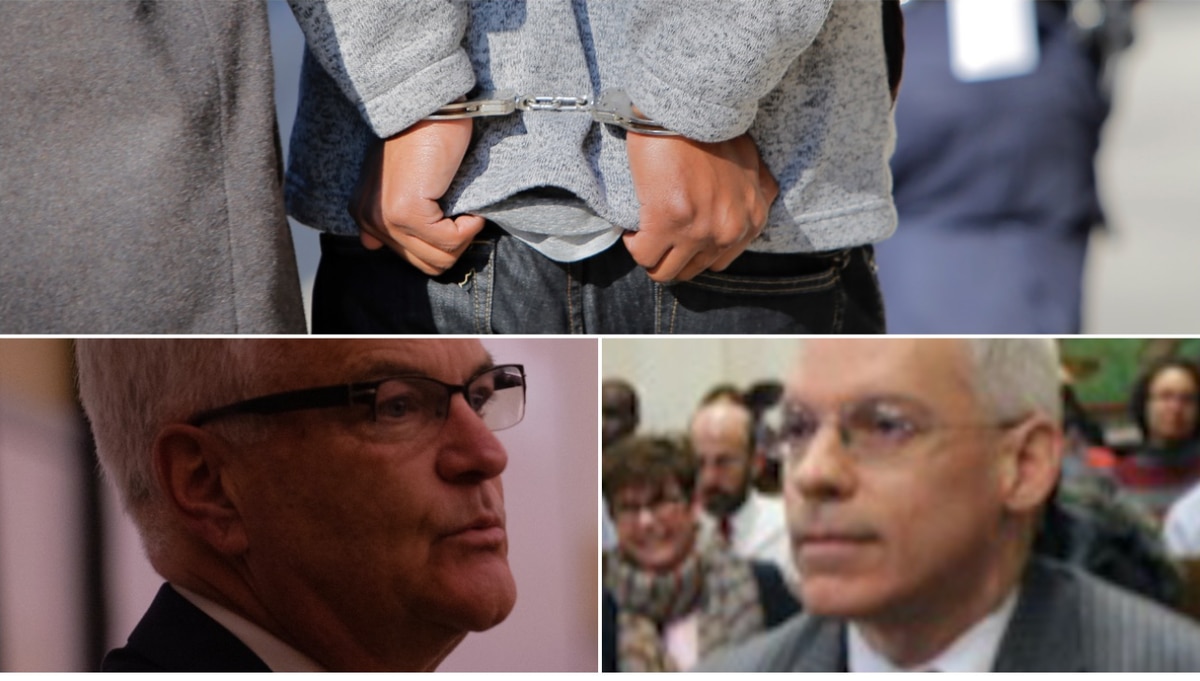 And that’s putting it mildly.

The laws, which take effect on Jan. 1, 2020, eliminate bail for nearly all misdemeanor charges and many felony charges.

The controversial legislation has sparked dueling and tartly-worded opinion pieces in the Advance and on SiLive.com, with District Attorney Michael E. McMahon on one side and the Legal Aid Society and the Staten Island Criminal Defense Lawyers Association on the other.

The Legal Aid Society represents indigent individuals, who comprise the majority of the defendants who appear before the court.

McMahon blasted the law as the byproduct of legislators’ “irresponsible and soft-on-crime policies.”

The new statute will not only hinder law enforcement’s ability to protect crime victims, but parts of it will put “hundreds of major drug defendants” back on the street, he said.

“This wave (of criminal-justice reforms) will sweep us back to the dark ages of the ‘70s and ‘80s and give the wild gangs, violent thugs, death-dealing pushers and violators of women and children the keys to the city,” the D.A. wrote.

“It is indeed idiotic and outrageous,” McMahon opined, urging borough residents to implore their legislators and the governor to amend the new laws before they take effect.

The Staten Island Criminal Defense Lawyers Association shot back in its own opinion piece. The group contends McMahon, who’s running for re-election in November, is resorting to “fearmongering and misdirection” in a bid to rejigger the legislation.

“The law is here to protect all persons regardless of race, creed, background or economic statuses,” wrote the group.

Statutes, as currently written, give prosecutors an unfair advantage by allowing them to withhold crucial information until the day of trial, the association says.

Not only are defendants left guessing about the strength of the case against them, they are set up for a “trial by ambush,” maintains the group.

“If things were changed to reflect the opinions of D.A. McMahon, your families, friends and neighbors would be at risk of being treated as if they were guilty until proven innocent,” the group contends.

In a separate Op-Ed, Christopher Pisciotta, attorney-in-charge of the Staten Island Criminal Defense Practice at the Legal Aid Society, contends the reforms are “long-needed.”

The new statute will level the scales of justice which, Pisciotta wrote, “tilt in the favor of the government … (and) incarcerates poor people who can’t afford to buy their freedom.”

“Our old, flawed criminal justice system can drive innocent New Yorkers to plead guilty to offenses they did not commit just to secure freedom from incarceration, to return to their families, their work and schools, and their communities,” wrote Pisciotta.

Under the law, bail will be eliminated for all misdemeanor charges, with the exceptions of sex offenses and criminal contempt for violating an order of protection in a domestic violence case.

Bail and pretrial detention are also scrapped for nearly all nonviolent felonies with the exceptions being witness intimation or tampering, murder conspiracy, contempt charges involving domestic violence and some offenses against children, sex charges and terrorism-related offenses.

In cases where there’s a risk of flight, judges can set a number of conditions upon a defendant’s release, including electronic monitoring for 60 days with an option to renew, supervised release, travel restrictions or limitations on weapon possession during the pretrial phase.

Bail and detention will still be permitted for virtually all violent felonies, except specific sub-sections of second-degree robbery and second-degree burglary.

According to the Center for Court Innovation, only 10% of the nearly 205,000 criminal cases arraigned in the five boroughs in 2018 would have been eligible for bail under the new law.

That means the vast majority of defendants would have been released pending the disposition of their case.

It’s particularly disturbing, say McMahon and Bridget Brennan, the city’s special narcotics prosecutor, that prosecutors will be able to seek bail and detention for only a handful of drug defendants – those specifically charged with “operating as a major trafficker.”

The A-1 felony carries a possible life sentence.

At a recent hearing before the City Council’s Committee on the Justice System, Brennan testified that her office has charged less than two dozen defendants under the Major Trafficker statute in the past five years.

In contrast, Brennan wrote in a Daily News Op-Ed on April 11, she’s charged, over the same time period, more than 1,000 defendants with other A-1 Level felonies, which carry a maximum 20-year sentence.

Brennan said she could not seek bail or detention for those defendants under the new law.

“Once the bail changes take effect, defendants facing these latter categories of serious A level felony charges will walk out of the court with no bail set,” Brennan testified.

The new law also requires prosecutors to provide most of their evidence to the defense within 15 days after arraignment. If prosecutors don’t have that information or there’s too much material to turn over, they have an additional 30 days to give it to the defense.

McMahon said he’s particularly concerned about releasing witnesses’ and victims’ name and contact information to the defense in the early stages of the case. That information typically had been turned over shortly before the start of trial.

The new law also allows the defense to seek a court order to access a crime scene or other premises, including victims’ or witnesses’ homes, he said.

The D.A. fears the early disclosure of that information could have a chilling effect on witness cooperation.

“It’s hard to imagine a victim of a crime willing to move forward with the prosecution of a criminal case while at the same time being forced to comply with these ridiculous measures,” said McMahon.

He contends the provisions threaten victims’ and witnesses’ safety and will require more time and resources to keep those individuals safe throughout the case.

At the City Council hearing, McMahon estimated his office would need at least an additional $2.8 million to implement the new reforms.

Pisciotta, of the Legal Aid Society, countered that crime victims’ safety and interests remain protected by the law.

Prosecutors, and the defense for that matter, can seek a protective order that could restrict, deny or set conditions on discoverable material, including witness information.

Said Mark J. Fonte, a St. George-based criminal defense lawyer and former prosecutor: “Witnesses do not belong to one side or the other, so both sides should be able to interview them.”

The Staten Island Criminal Defense Lawyers Association said the Brooklyn district attorney’s office has successfully practiced open discovery “for decades,” handing over evidence against the defendant near the start of the case.

“Witnesses are still showing up to court. Victims are still pressing forward and testifying at trial,” the group wrote. “Same thing goes for New Jersey. None of what D.A McMahon warns about it actually happening.”

McMahon said he supports measures that would prevent defendants from being held on bail simply because they can’t pay it; however, he opposes the legislation as written.

“Without hearings or meaningful input from law enforcement, they passed a package of bills written by and served up on a silver platter by the defendants’ lawyers,” McMahon said in a statement to the Advance. “They did not listen to victims’ advocates, police and detectives, judges, corrections officers or prosecutors.”

“We, who every day protect and serve, have been cast as the ‘enemy,’” said the D.A.

McMahon, who said he has reduced the wait in jail to a defendant’s arraignment by almost 33% and deferred over 600 addicted drug defendants from prosecution to treatment, also took a swipe at the Staten Island Criminal Defense Lawyers Association’s charges of fear mongering.

“I find it rich that my critics hide behind the anonymity of a made-up defendants’ organization or question my commitment to fair and effective prosecution in my home community of Staten Island and they drive home every evening to their tony neighborhoods in New Jersey,” he said.

However, O’Neill said he fears the new law will have “a significant negative impact on public safety.”

Among other things, he said, judges will be forbidden from remanding or setting bail even for flight risks in the cases of lower-level burglaries and robberies and nearly all drug-trafficking cases, regardless of the defendant’s criminal record.

NO REASON TO FEAR?

Fonte, the defense lawyer and former prosecutor, said Staten Islanders have no reason to fear the reforms.

“There is nothing in the new laws which should cause any concern for the people of Staten Island,” said Fonte. “Violent criminals will remain held and incarcerated. Nonviolent criminals will be given dates to return to court. The new law brings a sense of fairness to the criminal justice system.”

He said the sentencing guidelines will remain the same, and defendants charged with violent crimes “will be subject to the same bail conditions which have existed for decades.”

Pisciotta said New York’s discovery laws are among the most restrictive in the nation and have been referred to as “blindfold laws.”

Under them, state prosecutors are allowed to withhold crucial evidence, such as witness statements, grand jury testimony and other forms of evidence gathered, from the defense until the day of trial, both Pisciotta and the defense lawyers’ group say.

As a result, Pisciotta said, defendants must make vital decisions to go to trial or plead guilty “without knowing critical information and evidence.”

“We cannot continue to use bail to force people to give up their day in court,” wrote Pisciotta. “We cannot force people to make such critical Constitutionally-protected decisions without being informed of the nature of the evidence.”