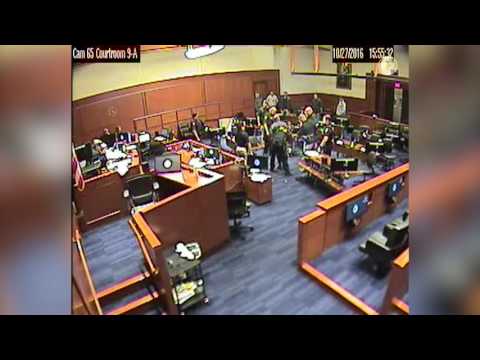 In a three-sentence order, U.S. District John C. Coughenour granted prosecutors’ motion to dismiss two charges against Mumford without prejudice, meaning the government could bring them back in the future.

Mumford’s lawyer, Michael Levine, had argued repeatedly that the deputy U.S. marshals engaged in “outrageous” misconduct and lacked authority to wrestle Mumford to the ground and stun him with a Taser gun while he was arguing on behalf of Bundy in a federal courtroom last fall.

The scuffle occurred after Bundy was acquitted of all charges on Oct. 27 at the end of a five-week trial over the armed takeover of the Malheur National Wildlife Refuge last winter.

Special federal prosecutors assigned to the criminal case against Mumford had  filed a motion Monday to dismiss all the charges. It came on the first business day after a federal jury in Portland found four remaining defendants guilty on a variety of charges stemming from the occupation of the Malheur National Wildlife Refuge.

Acting U.S. Attorney John Harrington of the Eastern District of Washington declined  to explain why his prosecutors chose to dismiss the charges now.

Specially assigned Assistant U.S. Attorney Timothy Ohms last month defended the criminal allegations, contending Mumford was blocking marshals from taking Bundy back into custody at the end of trial. When Mumford resisted arrest, he was stunned with the Taser, Ohms said.

Coughenour, a judge from the federal Western District of Washington, had been assigned to preside over the case. U.S. District Judge Anna J. Brown, who presided over the Bundy trial, and local prosecutors were recused from it. Brown, her courtroom deputy, law clerk and court reporter could have been called as witnesses at trial, Levine told the court last month.

Coughenour last month ordered prosecutors to turn over to Mumford’s lawyer any text messages between marshals, federal protective service officers or court security on their government-issued cellphones that revealed “hostility” toward Mumford “or in any way casts doubt on their credibility.” The government also was ordered to turn over information that cast doubt on a witness’ credibility, as required by law.

Mumford Monday night told The Oregonian/OregonLive that the prosecutors’ move to dismiss the charges was “completely unexpected” but welcome.

“On the one hand, I want to commend them for doing the right thing,” Mumford said. “On the other hand, it makes me wonder why they did it. There’s more unanswered questions.”

Mumford said he and his lawyer were waiting to receive discovery from the government that the court had ordered prosecutors to turn over and instead they saw the motion to dismiss the charges.

“I’m very pleased you know,” Mumford added. “It allows me to take care of my own clients.”