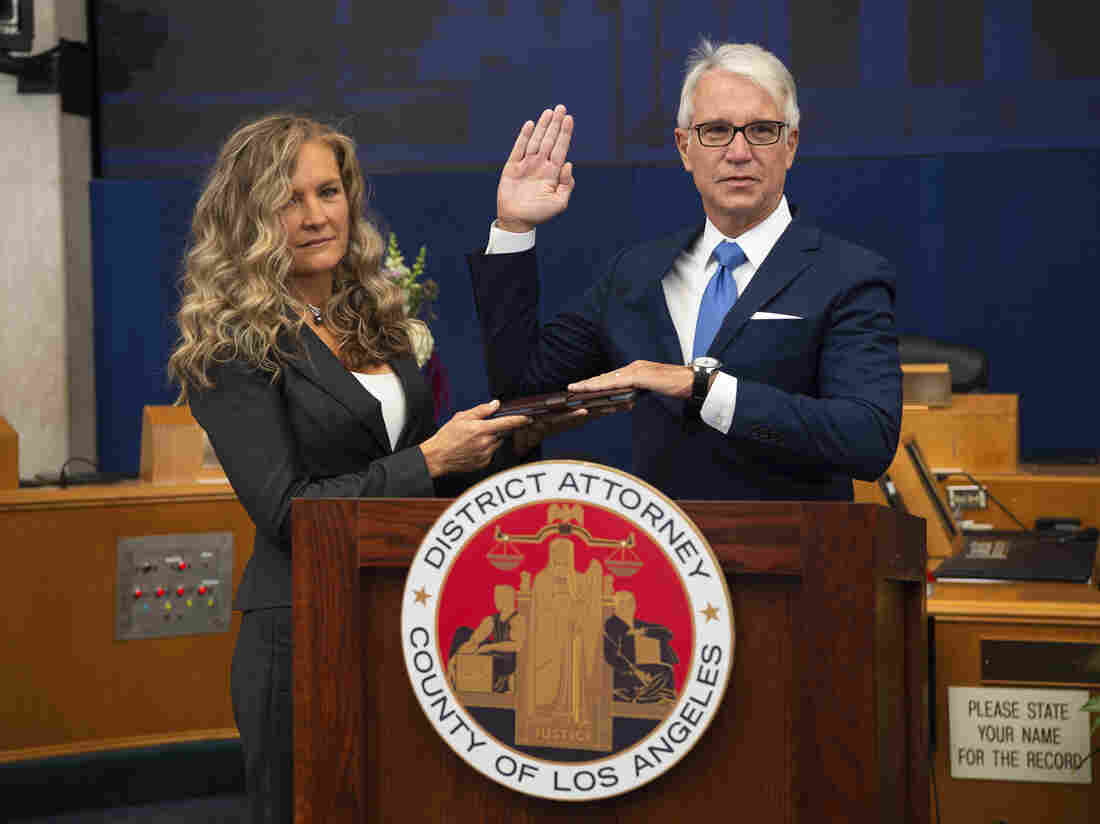 Los Angeles County District Attorney George Gascón is sworn in accompanied, by his wife Fabiola Kramsky. During his inaugural speech, he unveiled a series of criminal justice reforms that impact how prosecutors in his office pursue convictions, sentencing and cash bail.

Newly sworn-in Los Angeles District Attorney George Gascón used his inaugural address to introduce himself as a transformational agent and unveil sweeping changes to the criminal justice system of California’s most populous county.

Gascón is a former officer with the Los Angeles Police Department who now leads the nation’s largest district attorney’s office. In a series of tweets he said the experiences he faced as a young officer 40 years ago stayed with him. They also shaped his approach to criminal justice reform.

Among the changes, many of which went into effect Tuesday, call for ending the death penalty, stopping most uses of cash bail for misdemeanor nonserious or nonviolent felony offenses and prioritizing cases for resentencing inmates who are serving excessive prison terms.

“I recognize those are big changes,” said Gascón, a Democrat. “But they are changes that will enable us to actually protect the truly vulnerable.”

He also called for a Use of Force Review Board. Gascón said the review board would comprise civil rights attorneys, members of the community and policing experts, to review law enforcement fatal use-of-force cases going back to 2012.

During his remarks Monday, which were delivered via video link amid the surge of coronavirus cases in Los Angeles County and throughout the state, Gascón said the Memorial Day killing of a Black man by Minneapolis police laid bare the inequities of what he called the “two-tiered system of justice.”

“The murder of George Floyd this summer was a horrific reminder that too often our profession has failed to hold its own to the same standards we impose on the communities that we are sworn to protect and to serve,” he said.

“It galvanized a generation to stand up, and speak out against a system that the public largely views as a two-tiered system: one for police officers and prosecutors, and one for everyone else.”

As the Los Angeles Times points out, Gascón’s policies are seen by many as a departure from his predecessor Jackie Lacey who critics said was “an overly punitive district attorney. “

Gascón is one of several newly elected district attorneys across the country who are attempting to make good on campaign pledges to make radical changes to the local justice systems.

The LAist reports that Gascón faces both opposition to much of his agenda, namely from his own prosecutors and law enforcement officers he must work with, as well as an uptick in violent crime in LA County.

In what the publication describes as “perhaps his boldest move,” he calls for the banning of sentencing enhancements, a step which could lead to the release of thousands of inmates.

Seeking longer prison terms for criminal defendants with past felony convictions or for those suspected of being in a gang had become a common practice among LA prosecutors.

On cash bail, Gascón said by Jan. 1 his office will unveil detailed plans to end the system of money bail “in its entirety.”

According to a special directive effective Tuesday, prosecutors will now be instructed to ask the court for the criminal defendant’s release. Bail can still be considered at arraignment if the defendant is accused of a violent felony or sexual assaults.

“[The new policy] will reinvigorate the presumption of innocence in Los Angeles County,” he said.

On Election Day last month, California voters rejected Proposition 25, which was an effort to end the state’s system of cash bail.

The district attorney’s office will also no longer seek the death penalty in Los Angeles County and current cases with a judgment of death will be reviewed, with the ultimate goal of getting the capital punishment removed.

“The reality is the death penalty does not make us safer, it is racist, it’s morally untenable, it’s irreversible and expensive and beginning today it’s off the table in LA County,” Gascón said.

“And it’s not just off the table going forward, I am committed to resentencing those currently on death row to life in prison.”