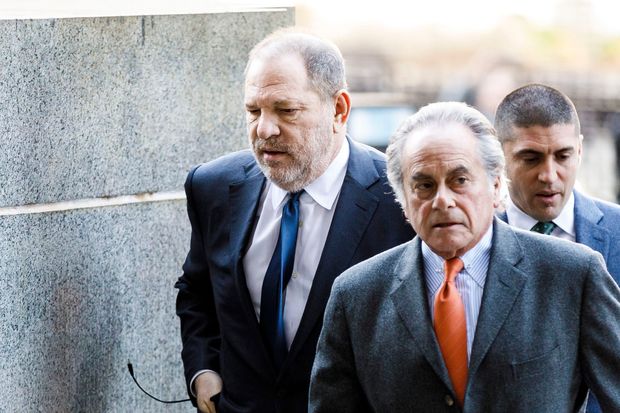 Movie producer Harvey Weinstein at court in New York City last month behind his lawyer, Benjamin Brafman, who is quitting the case.

Hollywood producer Harvey Weinstein and his criminal defense lawyer, Benjamin Brafman, are parting ways, throwing a wrench in the filmmaker’s legal strategy and potentially delaying his May trial in New York City.

“Both parties have agreed to part ways amicably and Mr. Brafman has agreed to cooperate fully with new counsel for Mr. Weinstein so as to ensure an orderly transition,” the two men said in a joint statement Thursday.

Mr. Brafman represented Mr. Weinstein in his case in state court in Manhattan, where he faces sex-crime charges, including rape, relating to alleged incidents with two women. Mr. Weinstein has pleaded not guilty and denied all accusations of nonconsensual sex.

The case had been scheduled to go to trial on May 6, a date which could get pushed back if new lawyers request additional time to prepare a defense. Mr. Brafman still has to formally notify the judge he is withdrawing from the case.

Mr. Weinstein intends to introduce his new legal team by early next week, the statement said.

Mr. Brafman is a high-profile and respected criminal-defense attorney who is known for having a knack with juries. His past clients have included Dominique Strauss-Kahn, former chief of the International Monetary Fund, and Martin Shkreli, a former pharmaceutical executive.