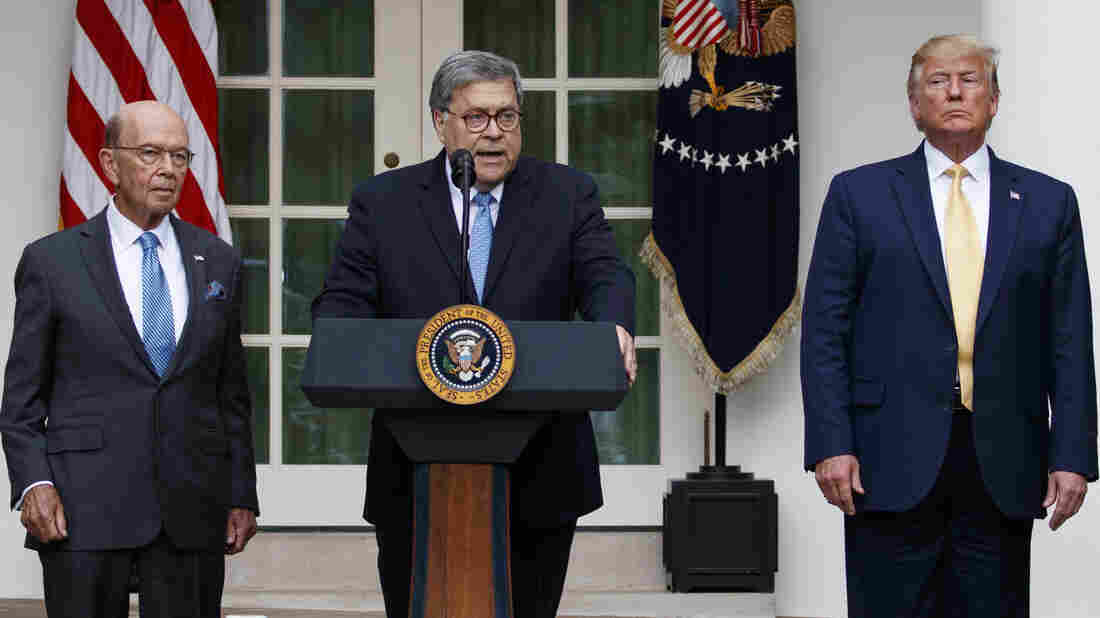 Attorney General William Barr speaks as he stands with President Trump and Commerce Secretary Wilbur Ross during an event about the census in the Rose Garden at the White House earlier this month.

The House of Representatives escalated its confrontation with the executive branch Wednesday by holding two Trump administration officials in criminal contempt for not providing complete copies of subpoenaed documents related to the 2020 census.

In a deeply divided House, Wednesday’s criminal contempt measure passed on a mostly party-line vote of 230-198. The House’s lone independent, Rep. Justin Amash of Michigan, backed the measure. Four Democrats broke with their leaders and opposed it. The rebuke of Trump Cabinet officials comes just a day after the House passed another resolution condemning the president himself for racist tweets over the weekend.

The move marks the second time a sitting attorney general has been found in criminal contempt by the House. The first time was back in 2012, when the House voted to hold then-Attorney General Eric Holder in contempt over his failure to turn over documents for the chamber’s “Fast and Furious” probe. Seventeen Democrats joined with what was then a Republican majority to secure that outcome.

In a sign of how long these actions can take, the House and Justice Department engaged in a legal battle that took seven years to resolve — and without any criminal penalty for Holder.

Shortly before the vote, Barr and Ross sent a letter to House Speaker Nancy Pelosi urging her to postpone the House action and arguing their departments had made efforts to cooperate with the committee. They also said some of the materials requested were withheld because of the president’s decision to assert executive privilege.

“By this action, the House is both unnecessarily undermining inter-branch comity and degrading the constitutional separation of powers and its own integrity,” they wrote.

Wednesday’s vote was a largely symbolic gesture; it’s unlikely that the Department of Justice would move to prosecute the attorney general. The House had previously threatened to pursue a vote on civil contempt against Barr but backed off after the Justice Department made some concessions.

But the symbolism represents a substantial escalation: These would be the first criminal contempt citations passed since Democrats took control of the House in January.

The secretary dismissed the vote as “just more political theater” and noted that his department had handed thousands of pages of documents over to the committee already.

“We are not stonewalling. But we are also not yielding on the very, very important matter of executive privilege … we are not going to be frightened into changing that position just because of some action the House might take,” Ross, who oversees the Census Bureau, told Fox Business on Wednesday morning.

House Democrats had demanded information about why the administration sought to add a citizenship question to the 2020 census and were not satisfied with the response, saying that neither Barr nor Ross responded to a legitimate congressional subpoena.

Democrats have been feuding with the Trump administration over the citizenship question since it was announced last year that the federal government was seeking to add it to the 2020 census.

In recent days, following a Supreme Court decision that stalled the administration’s efforts, President Trump announced that he’s no longer pushing for the question to be included in the census.

Shortly after, administration officials were formally accused of improperly covering up the question’s origins.

Commerce and Justice department officials “obscured evidence suggesting that the true purpose of Secretary Ross’s decision to add a citizenship question to the 2020 Census — suppressing the political power of minority immigrant communities,” alleged lawyers with the American Civil Liberties Union and other groups challenging the question in court.