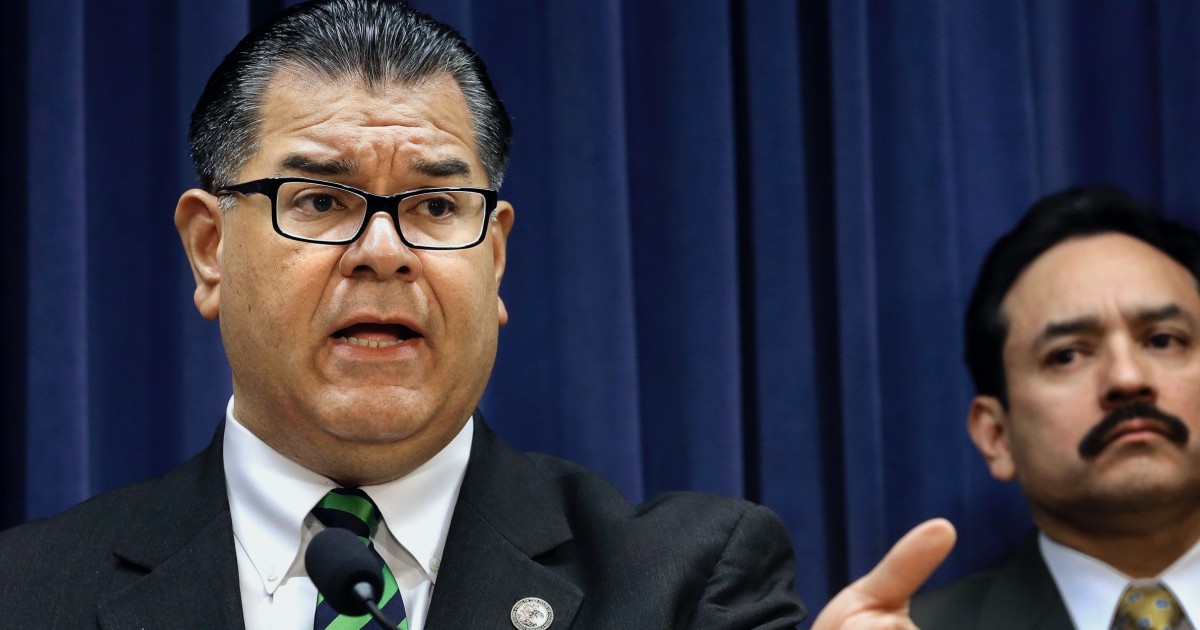 The lawyer, Dylan Smith, said he spoke with Sandoval’s family and learned the once-powerful Illinois politician had died after contracting the novel coronavirus.

Sandoval, 56, admitted to bribery and tax evasion charges in federal court in January, acknowledging he illegally pocketed more than $250,000 and abused his power at a state lawmaker on behalf of a red-light-camera company.

And just last month, federal investigators wrote in a court filing that Sandoval “has provided valuable cooperation that is expected to last several months.”

Sandoval lived in the Gage Park neighborhood on the Southwest Side of Chicago and died at 10:01 a.m. Saturday, according to the Cook County medical examiner’s office. A spokeswoman for the office said, “Cause and manner [of Sandoval’s death] are pending at this time.”

Smith said Sandoval died as he was working to make amends for his misdeeds as an elected official.

“I came to know him as someone who had considerable abilities, someone who had done a great deal of good in his life,” Smith said. “Although he had strayed from the standards he set for himself, he was working very sincerely to make amends for those mistakes through his cooperation with the government. I know he was genuinely remorseful, and I hope he is remembered as the complete person he was, and not just for his mistakes.”

A spokesman for U.S. Attorney John Lausch, whose office is leading the ongoing Springfield corruption probe, declined to comment on Sandoval’s death.

But court records showed investigators had taken a deep interest in a wide variety of topics related to Sandoval.

The federal probe came to light when agents raided Sandoval’s offices at the Illinois Capitol and in Cicero in September 2019.

Documents from the raid of his office at the Capitol revealed that the feds were seeking information about not only red-light cameras but also a suburban road-paving magnate, a video-gambling operator and Commonwealth Edison.

In July, ComEd admitted to a bribery scheme intended to win the favor of Illinois House Speaker and state Democratic Party Chairman Michael Madigan, who has not been charged and has denied wrongdoing. Sandoval’s senate district had included Madigan’s House district.

The effect Sandoval’s death will have on the ongoing investigation is unclear. Both ComEd and its former top in-house lobbyist, Fidel Marquez, Jr., are cooperating with the probe, as well. Marquez pleaded guilty to his part in the scheme in September.

For its part, ComEd also has disclosed getting subpoenas for all its communications with Sandoval, and the state-regulated power company also has said it employed Sandoval’s daughter.

Sandoval’s death comes at a particularly sensitive time politically for Madigan, who is in a desperate bid to hold onto his speakership. Support within his own House Democratic caucus for another term has collapsed under the weight of the federal investigation.

Nineteen House Democrats have publicly vowed they would not support Madigan for another term as speaker, putting him six votes shy of the necessary 60-vote threshold he needs next month.

Sandoval had turned government cooperator after he was secretly recorded discussing how he could accept bribe payments from the SafeSpeed red-light-camera company, which operates the devices in many municipalities in the Chicago suburbs.

In taped conversations that were revealed in his plea deal earlier this year, Sandoval boasted that he had served as SafeSpeed’s “protector” in the Illinois Senate, and he said he resented how others were making money off the company – but he had not.

“I’ll go balls to the walls for anything you ask me,” Sandoval told an informant. “It’s hard for me to swallow how [people] make so much off of you. Right? And I gotta do the work.”

Sandoval then agreed to take $5,000 a month for his help to the company.

He later admitted to taking bribes from five individuals and filing a false tax return, “substantially” understating his true income.

In one case, prosecutors have charged longtime Chicago political operative William Helm with bribing Sandoval to help win state approval for a project in East Dundee involving Helm’s consulting client, according to court records and a source close to the investigation. Sandoval was head of the Illinois Senate’s transportation committee at the time of the alleged bribe.

Sandoval came to power in 2003 with the help of the now-defunct Hispanic Democratic Organization, a patronage army that was created by supporters of then-Mayor Richard M. Daley.

When HDO collapsed in the wake of a hiring fraud scandal at Chicago’s City Hall, Sandoval was not charged with any wrongdoing. But he was among HDO’s most vocal defenders, saying authorities who targeted the group acted out of racism against Latinos.

In addition to his work in Springfield, Sandoval owned a company called Puentes Inc., which was paid to do public-relations work for the town of Cicero and other municipal clients, according to state records.

Earlier in his career, Sandoval drew attention from federal investigators over his awarding of tuition waivers to college students under the now-disbanded legislative scholarship program.

Legislators were given an annual allotment of tuition waivers to state colleges and universities to award at their discretion to students living in their legislative districts.

In 2011, the State Board of Education turned over records to the FBI over five tuition waivers Sandoval made over multiple years to students who all listed their home addresses to a house owned by a Sandoval campaign aide even though state records show they really resided outside his state Senate district.