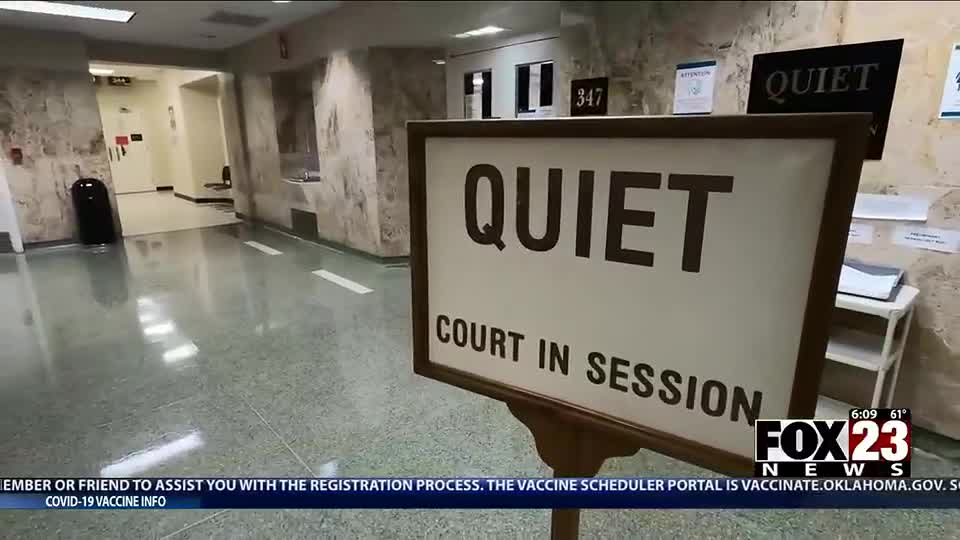 TULSA, Okla. — A Green Country attorney will find out Thursday if he is a free man or if his fate will be put in the hands of a jury.

Winston Connor was arrested in early 2019 on numerous charges involving alleged crimes in three counties (Ottawa, Tulsa, and Pittsburg) where prosecutors said he worked with a prison gang leader on a murder for hire plot and a plot to assault a man who had stolen his secretary’s car in addition to recovering that car.

There are also charges related to whether or not he has ties to two massage parlors in the Tulsa metro area that have been busted for offering illegal sexual services.

On Wednesday, prosecutors tried to admit the tapes they said you could hear Connor planning with Tate a murder and an assault. Those tapes came from a wiretap the Oklahoma Bureau of Narcotics had on inmate Slint Tate’s cell phone he illegally was using in prison that had been sneaked in for him likely by a fellow gang member at an unknown earlier time. Tate was being investigated for drug trafficking in the maximum security prison in McAlester when state agents began to take note of Connor.

Tate’s gang operates both in and outside of prison, and on Wednesday, a state drug agent said there are people who do work for Tate once they get out of prison as a thank you for the protection he provided them while they were behind bars.

Prosecutors argue Connor wanted Tate to use his gang to kill a convicted murderer out of Tulsa County, Sterling Williams, because he killed the roommate of someone Connor is close to and that person barely escaped the incident. They also argue that Connor asked Tate to get back his secretary’s stolen car and beat up the man who took it. In exchange for these acts, Connor allegedly promised to look over Tate’s case and work hard to get him a reduced sentence.

Tate is in prison for life without parole for a murder he was convicted for back in 1999. Tate would be given an additional 20 years for a meth ring he ran behind bars in McAlester.

The tapes prosecutors claim prove Connor and Tate were working together were reviewed by Judge April Siebert in her chambers, and then were played in open court so a state drug agent testifying could identify who was talking to who. However, Siebert threw out some of the phone calls saying she heard nothing on them that proved a conspiracy to kill someone.

The defense claims that Tate likes to lie and exaggerate to motivate his crew to carry out what he wants. One of those lies was that Connor wouldn’t look at his case unless Tate’s gang did these two things for him. But the defense said the mention of Connor and what he allegedly wanted all came from Tate words and never from Connor’s own mouth.

Seibert said she did not clearly see how one of the main phone calls being used against Connor showed criminal conspiracy to commit a murder.

Testimony on other alleged crimes, including those related to two Tulsa area massage parlors busted for offering sex in addition to their services happened on Monday and Tuesday.

Closing arguments begin Thursday morning, and if not enough probable cause if determined, Connor could be a free man.