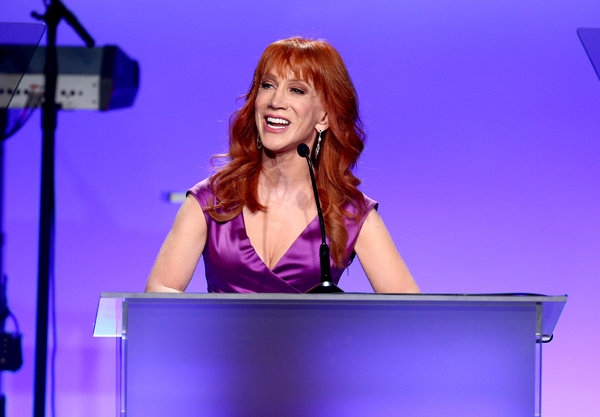 The Secret Service is investigating Kathy Griffin for the photo online of her holding what looks like the decapitated head of President Trump, her lawyers disclosed on Friday.

“We’re going to fully cooperate with the Secret Service in their investigation,” said Dmitry Gorin, a criminal lawyer hired by Ms. Griffin, based out of Los Angeles.

Mr. Gorin, speaking at a news conference with Ms. Griffin that had several raucous moments, argued that the investigation should not have been initiated.

“She basically exercised her First Amendment rights to tell a joke,” he said. “When you look at everything in the media, all the times entertainers make videos or express themselves in other ways, you’ve never seen an entertainer, let alone a comedian, be subject to a criminal investigation.”

Ms. Griffin swung from defiant to emotional as she spoke to reporters, and even cracked jokes in an attempt to portray herself as a victim of a sexist backlash spurred by Mr. Trump.

“I don’t think I will have a career after this,” Ms. Griffin said tearfully. “I’m going to be honest. He broke me.”

But she said that she would continue to mock Mr. Trump, even amid alleged death threats and the loss of work that have resulted as a backlash to the photo.

“I’m not afraid of Donald Trump,” Ms. Griffin said. “He’s a bully. I’ve dealt with older white guys trying to keep me down my whole life, my whole career.”

A Secret Service spokesman declined to comment on Friday.

The agency routinely investigates comments that might be deemed threatening to a president. In 2012, Ted Nugent had to meet with the Secret Service after saying at a meeting of the National Rifle Association, “We need to ride into that battlefield and chop their heads off in November,” referring to the Obama administration.