A Southern California defense lawyer said he was brutally beaten inside an Orange County courthouse Wednesday by an investigator for the district attorney’s office.

James Crawford was thrown into a bench, then punched in the head around 10 times, his attorney, Jerry Steering, told BuzzFeed News. The Orange County District Attorney’s Office said in a statement they are cooperating with a sheriff’s investigation that, once complete, will be reviewed by the California Attorney General’s Office.

The incident took place around 10:30 a.m. Wednesday in a hallway of the courthouse. Steering was heading toward the courtroom to meet with a woman he had been assigned to advise of her rights in an upcoming hearing.

An investigator for the district attorney’s office made a comment to Crawford calling criminal defense attorneys “sleazy,” Steering said.

“I’ve been a lawyer for 32 years,” said Steering, who specializes in police misconduct cases. “I don’t walk up and say, ‘Cops are sleazy.’ I sue cops for a living.”

But for the last two years, tensions have been high in Orange County courts over the use of jailhouse informants — and what some defense attorneys have alleged is systematic misconduct by the district attorney’s office. In a recent development, Crawford won a new trial for a man previously convicted of murder after successfully arguing that county prosecutors had withheld evidence.

Crawford did not know the man who spoke out to him Wednesday in the hallway, but he has been identified as an investigator for the district attorney’s office. Investigators aid prosecutors throughout the criminal process; many previously worked as police officers or deputy sheriffs.

“I think the investigator must have known him,” Steering said. 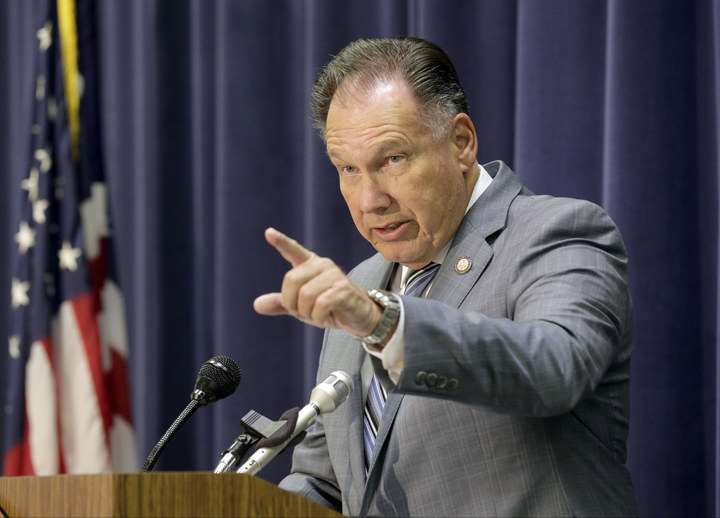 In a statement, the Association of Orange County Sheriff’s Deputies — the union which also represents district attorney investigators — said Crawford’s account of what happened was untrue.

“There were many independent bystanders in the hallway who witnessed exactly what happened in the courthouse. Criminal defense attorney James Crawford’s one-sided version is simply not true. A careful investigation will reveal the true facts. We are cooperating fully in that investigation and we look forward to the actual facts being released publicly.”

According to Steering, after being called sleazy Crawford responded that the DA’s office was just as bad, citing the ongoing informant scandal. The investigator then called him a douchebag, Steering said, to which Crawford responded, “Fuck you.”

As Crawford was walking away, the investigator tossed a binder clip at his head, Steering said. Crawford tossed it back.

Crawford’s head was smashed into a bench, and he was punched repeatedly until sheriff’s deputies and police officers pulled the investigator off, Steering said.

No one was arrested, and neither of the men were taken to a hospital, said Lt. Mark Stichter of the Orange County Sheriff’s Department. An investigation is underway, and so far Stichter said he could only confirm a verbal argument between the men led to a physical altercation.

When Crawford met with Steering, he was still dripping blood, Steering said.

For now, Crawford is getting back to work — but he’ll also be suing the district attorney’s office and the investigator.

“He’s not going to punch him,” Steering joked.

Check out more articles on BuzzFeed.com!

Claudia Koerner is a reporter for BuzzFeed News and is based in Los Angeles.