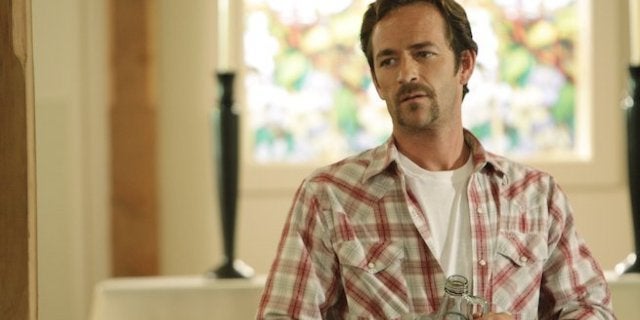 The late Luke Perry is known for his starring roles on Beverly Hills, 90210 and Riverdale, but one of his most beloved roles was one of Criminal Minds‘ most vicious villains.

The actor made several appearances on the CBS crime procedural series as Benjamin Cyrus, a cult leader and statutory-rapist-turned-attempted-murderer who became major target for the members of the Behavioral Analysis Unit.

Born Charles Mulgrew, Benjamin grew up to become the leader of a religious cult known as the Separatarian Sect. He was identified by authorities as a perpetrator of child abuse and was revealed to be married to a teenage girl during his first appearance in Season 4.

When he was first shown in the series, Reid (Matthew Gray Gubler) and Prentiss (Paget Brewster) are called in to meet with him but he holds them hostage. After Prentiss reveals herself to be the “sole” FBI agent infiltrating the sect, the man ends up beating her up badly.

Rossi (Joe Mantegna) attempts to reason with him and asks him to release the children he has captured but he refuses for his protection. He then prepares a mass suicide ritual to root out the unbelievers in his troop, but it is then revealed that it was a bluff.

Benjamin later agrees to let the children go, but hides the fact that the compound is rigged with explosives and plans to kill everyone. He is shot to death just in time to stop his plans momentarily and gives enough time for the agents and the children to leave.

However, his teenage bride picks up the trigger and detonates the bombs, killing herself and the other cult members.

The memory of Benjamin Cyrus returned in the Season 14 premiere, the series’ 300th episode, when Prentiss recognized the Believers cult they had encountered — and that had kidnapped Reid and Garcia (Kirsten Vangsness) — as former followers of Benjamin’s.

Perry returned during the episode in terrifying flashbacks that fans over at the time as callbacks to the Season 4 episode.

The actor suddenly passed away Monday after suffering a “massive” stroke. His representative confirmed the news of his death in a statement.

“Actor Luke Perry, 52, passed away today after suffering a massive stroke. He was surrounded by his children Jack and Sophia, fiancé [sic] Wendy Madison Bauer, ex-wife Minnie Sharp, mother Ann Bennett, step-father Steve Bennett, brother Tom Perry, sister Amy Coder, and other close family and friends,” Perry’s publicist said. “The family appreciates the outpouring of support and prayers that have been extended to Luke from around the world, and respectfully request privacy in this time of great mourning. No further details will be released at this time,” the statement concluded.

Many fans and co-stars have spoken out to express the grief, as well as sending messages of support to his family during this difficult time.