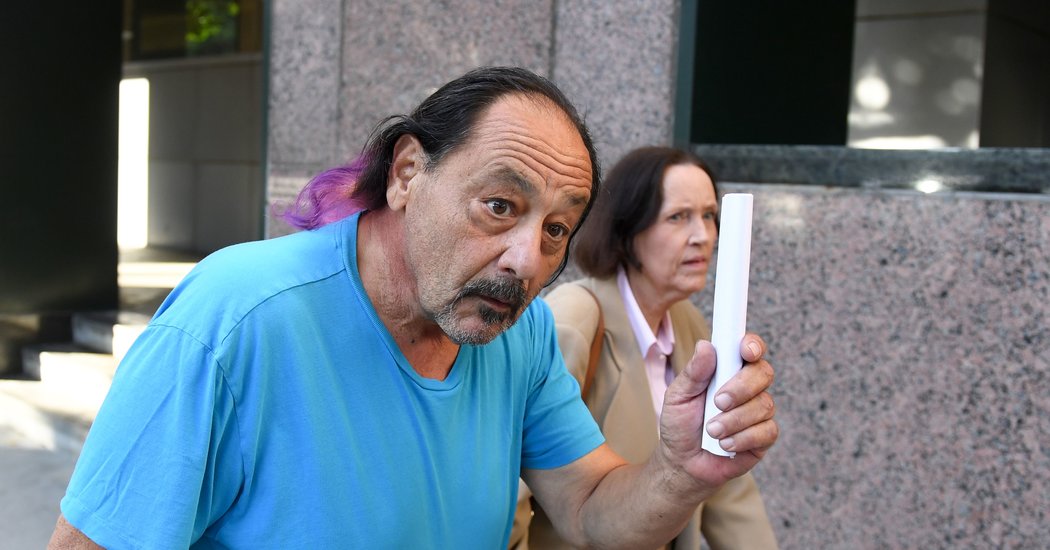 A man charged with threatening to kill employees of The Boston Globe last summer will plead guilty to all seven criminal counts against him, his lawyer said on Monday.

The man, Robert D. Chain, made a series of menacing phone calls to the Boston newspaper from his home in California last year, according to court documents. Transcripts of his comments during the calls show that Mr. Chain repeatedly threatened to shoot employees in the head, mentioned President Trump several times and used the phrase “enemy of the people,” which the president has frequently used to describe the news media.

“We will hunt you down and kill you and your dogs,” Mr. Chain said in one of the phone calls, according to court documents.

Mr. Chain, 68, was arrested in August at his home in the Los Angeles neighborhood of Encino. He was charged in federal court in Boston with seven counts of making threatening communications in interstate commerce. The charge carries a maximum prison sentence of five years.

“Mr. Chain intends to plead guilty to all counts in the indictment and take full responsibility for his actions,” his lawyer, William Weinreb, said in a statement on Monday. “He is anxious to make a full, public apology, expressing his sincere remorse to those he affected.”

The United States attorney’s office in Massachusetts and Mr. Chain’s lawyer declined to comment on Monday about whether any agreement had been reached regarding Mr. Chain’s sentencing.

The F.B.I. investigated Mr. Chain and found that he owned several firearms and had recently purchased a small-caliber rifle. He did not face criminal charges in connection with weapons possession. After his arrest, he was released on bond, and his next court hearing is scheduled for May 15.

Mr. Chain began calling The Globe immediately after the newspaper announced on Aug. 10 that it would publish a coordinated editorial response to political attacks on the news media. Federal prosecutors said his threats were in retaliation for that campaign.

Court documents show that in one phone call, Mr. Chain was asked why he was calling.

“As long as you keep attacking the president, the duly elected president of the United States, in the continuation of your treasonous and seditious acts, I will continue to threats, harass and annoy The Boston Globe, owned by The New York Times, the other fake news,” he replied. (The Times sold The Globe in 2013.)

Media executives have decried the president’s use of the phrase “enemy of the people,” calling it an assault on the First Amendment and warning that it could incite violence by the president’s most ardent supporters in the United States and embolden authoritarian political movements overseas.

Mr. Chain’s phone calls prompted The Globe to bolster its security, and officers with the Boston Police Department were dispatched to the newspaper’s office. Jane Bowman, a Boston Globe spokeswoman, said in a statement after the arrest that the newspaper was grateful to the authorities for investigating the threats.

“We couldn’t have asked for a stronger response,” she said, adding that “while it was unsettling for many of our staffers to be threatened in such a way, nobody — really, nobody — let it get in the way of the important work of this institution.”

In a statement after Mr. Chain’s arrest, the United States attorney, Andrew Lelling, said: “Anyone — regardless of political affiliation — who puts others in fear for their lives will be prosecuted by this office. In a time of increasing political polarization, and amid the increasing incidence of mass shootings, members of the public must police their own political rhetoric. Or we will.”