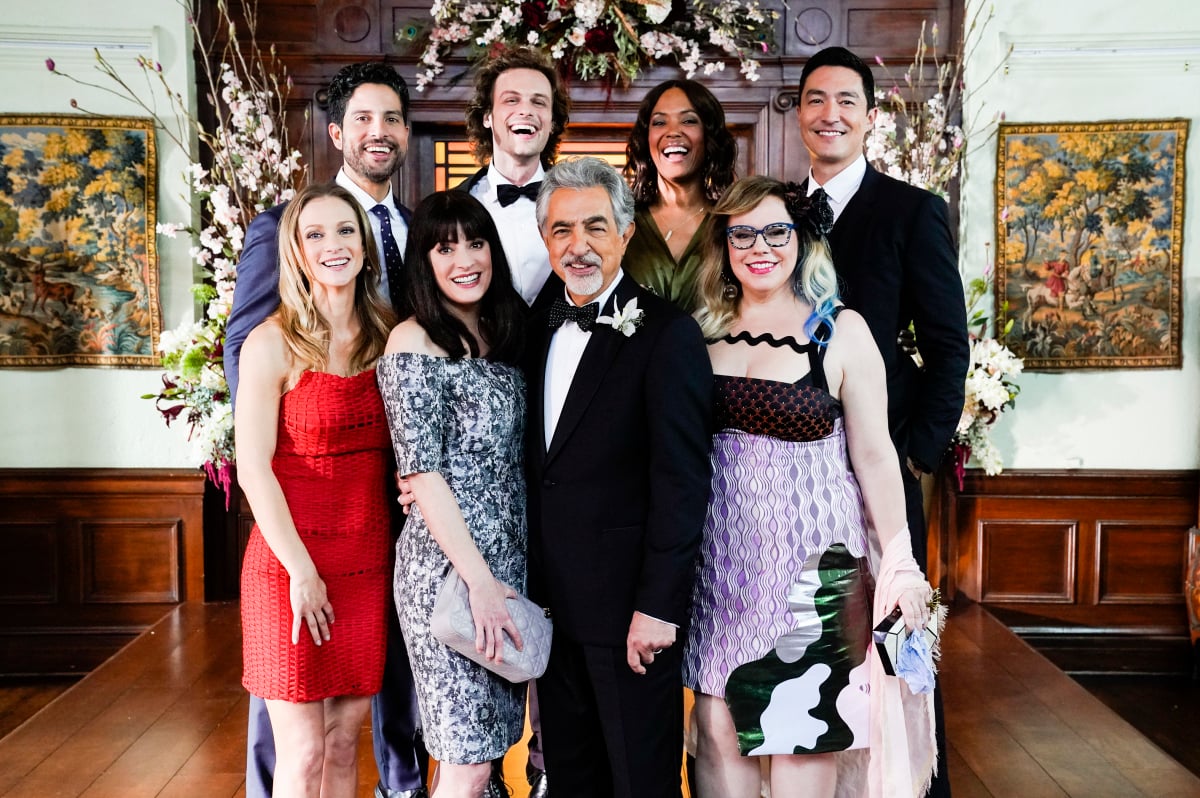 Bad guys are like buses. Another one always comes along. That’s been the truth of Criminal Minds, which wraps up its 14th season tonight catching yet another serial killer, but then ends on a more hopeful note with the wedding of Supervisory Special Agent David Rossi (Joe Mantegna).

“I always feel it’s such a relief by the end of the season if we can see our team unwind and this happens to be a celebration, not just the team unwinding with dinner and a glass of wine, but a true celebration,” says show runner Erica Messer. “They’re laughing, they’re clapping, they’re dancing and they’re having such a wonderful time.”

Messer says she initially thought about holding Rossi’s wedding to the series finale, which will happen in the 10-episode season 15, but then she thought, “‘No, it feels right to have the wedding at the end of season 14.’ I’m glad we didn’t save it. I think it was the right call.”

This is the fourth wedding for Rossi — but only the third bride. He and Krystall (Gail O’Grady) were previously married. Plus the wedding is one of the items on the checklist of things Messer hopes to accomplish before Criminal Minds wraps forever.

“We want Rossi to get it right this time and when we introduced Gail’s character last year, it felt like, ‘Oh, my gosh, there’s a nice spark here and what if the timing was just wrong last time?,’” Messer says. “The more we leaned into that and thought that it would be great to have a wedding at the end of the year, it just made more and more sense to have it be Rossi. We feel like he’s made mistakes throughout the years and he’s learned from them and she’s going to be really good for him.”

The surprise guest at the wedding is none other than legendary crooner Johnny Mathis, who just happens to be a real-life friend of Mantegna’s.

“We said to Joe, ‘Is there anyone in your amazing Rolodex who you’d like to have come be the best man in the wedding?,’” Messer continues. “He had a lot of friends that came to mind, including Johnny. Then it had a lot to do with availability and being in L.A. this time of the year. Johnny said he could do it and we thought, ‘Perfect,’ because we had introduced Johnny’s Greatest Hits in the episode where we introduced Gail’s character, so it just was kind of kismet. Then we all said, ‘We have to have “Chances Are” playing when everybody’s dancing because it’s just too good.’”

Following is more of what Messer has to say about the series and its finale:

So, it’s bittersweet news. The good news is you’re renewed for another season; the bad news is you only have 10 episodes to wrap it up. Do you know the end?

I’m heading toward an end right now, but I still have a little bit of time to figure it out and Kirsten [Vangsness] and I are going to write it together, so I really want to have her attention so we can really do another love letter to the fans. It’s no easy task to wrap up this world and these heroes.

I was joking that I have a list of things that I’d love to see happen, but every time I check one of them off, I add two more. It’s a lot to do in 10 episodes, but I feel good about ultimately where we will end the show. Also, being a fan of the show itself, I feel that responsibility but also the excitement of what would be next for these heroes.

Do we want everybody to be happily with partners at the end? Is it going to deal with personal lives?

We want to deal with personal lives for sure, but we haven’t really talked about pairing people up. That doesn’t necessarily fulfill a happiness quotient, so we just want to stay true to our heroes.

Are you bringing anyone back for the final season?

Absolutely! Jane Lynch is shooting right now, so it’s people like her that have made an impact on our heroes’ lives, good and bad, that we want to have circle back in these final 10.

At this point in time where are you getting the inspiration for all these stories? Do you still go back to real FBI cases, or do you maybe look at psychology textbooks and come up with a diagnosis and then come up with a story? How are you keeping the creativity going?

Everybody has a different way of doing it. Some writers come in with something that just frightens them. Sometimes they come in with, “Oh, my gosh, did you know about this particular thing that one of these famous serial killers did?” That’s so weird, we never explored that before, or sort of a combination of those things.

Bruce Zimmerman, who wrote the modern-day Pied Piper episode, he just said, “The Pied Piper was always such a scary concept and it’s a children’s book. I’d love to do the modern-day version of that.” I’m like okay, “What would that look like?”

He didn’t really know too much about the ASMR videos but another writer on staff did and said, “They’re known to have an influence on children of a certain age, children who like tactile things.” So Bruce did a ton of research on that and found out there’s a way that that could actually work.

So that became his episode. I know there are a lot of people who turn the channel when they know it’s going to be a story about children, anybody who you know did that missed an interesting journey because it was not about hurting children really, it was about getting revenge on their parents.

So, that one came about because Bruce had an interest in a modern-day Pied Piper. Everybody brings a different influence to the stories.

So in this finale and we won’t say what, JJ (A.J. Cook) reveals something that is a bombshell. Will it have repercussions in the next season?

Yes, because we feel there’s no way to have an emotional cliffhanger like that and then not deal with it earlier rather than later, so in the first handful of episodes in the final 10, we’ll be dealing with … I don’t even want to say the fallout of that but I guess that is the right word. It’s one of those things that is an opportunity to keep adding layers to our heroes, so that’s why we did it. It’s a big one though. I’m with you.

We have this big bad who has made Rossi question his abilities as a profiler. Will that also be wrapped up in the coming season?

Yes. That will be a thread that we will probably follow the entire final 10, because it definitely affects Rossi. This finale airs, and when we come back, story-wise we’re skipping six months. I don’t know when it will actually air, but we’re skipping a 6-month period so you’ll see where this obsession with Everett Lynch (Michael Mosley) has landed Rossi and the team. He’s definitely not okay to sleep until this guy is caught.

The season 14 finale of Criminal Minds airs tonight at 10 p.m. ET/PT on CBS.