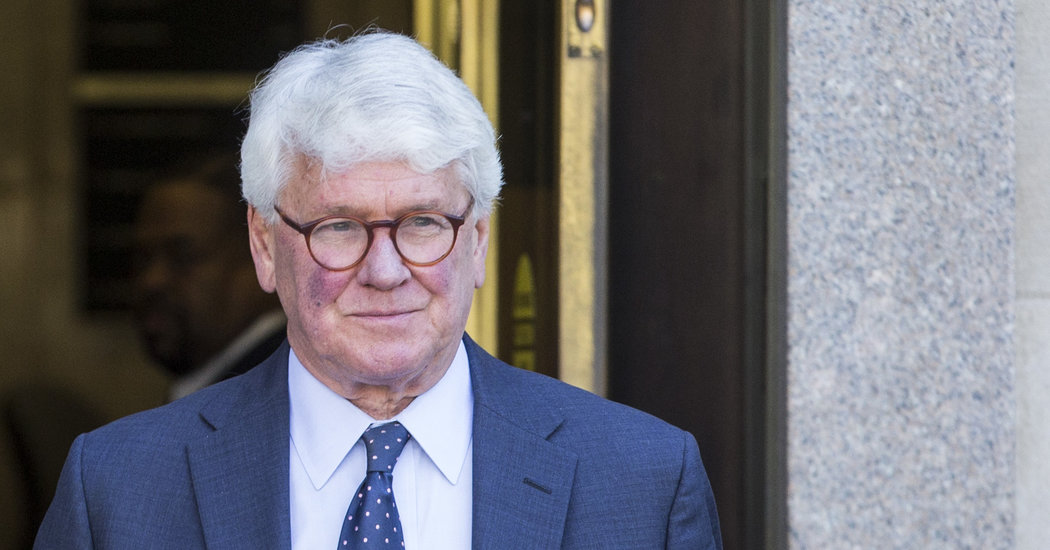 WASHINGTON — Not long before Christmas 2012, Paul Manafort, then a foreign lobbyist, congratulated Gregory B. Craig, a well-known Washington lawyer, on the release of a report that Mr. Manafort had commissioned to help Ukraine’s pro-Russian president polish his image in the West.

“Well done,” Mr. Manafort wrote in an email to Mr. Craig after the lawyer had briefed American journalists on the report, which largely justified the criminal prosecution of the Ukrainian leader’s political rival.

Government officials in Kiev, Ukraine’s capital, “are especially happy with the way the media is playing it,” Mr. Manafort wrote, later adding, “You are ‘THE MAN.’”

“I am glad it went so well,” Mr. Craig replied.

Seven years later, that email exchange will be evidence in a criminal trial that has shaken Washington’s lobbying, consulting and public relations industry to its core. Mr. Craig, 74, is charged with deceiving Justice Department officials who sought to determine whether he should have registered under the Foreign Agents Registration Act, commonly known as FARA, for work that earned his law firm more than $4.6 million.

His trial, which starts Monday and is expected to last about two weeks, is widely viewed as a litmus test of the Justice Department’s growing effort to hold more foreign lobbyists criminally responsible for conduct the agency once treated as mere administrative infractions. Although Mr. Craig is charged with lying to federal law enforcement officials — not for failing to register as a foreign agent — defense lawyers said his indictment signified a sea change in the Justice Department toward those who failed to disclose their foreign lobbying work.

“The fact that there is a Greg Craig trial shows how much the atmosphere has changed,” said Matthew T. Sanderson, a defense lawyer who specializes in foreign lobbying cases at the law firm of Caplin and Drysdale. “The Justice Department is going after some high-profile scalps.”

In a video posted on YouTube after his indictment, Mr. Craig predicted he would be exonerated at trial. “I did not participate in a scheme to mislead the government or conceal material facts,” he said. “This prosecution is unprecedented and unjustified. I am confident that both the judge and the jury will agree with me.”

If convicted, Mr. Craig faces up to five years in prison, although recent defendants charged with the same offense have been sentenced to from two weeks to a month behind bars.

But when the special counsel’s office closed up shop in May, the Justice Department signaled that its scrutiny of foreign lobbyists would continue. The department put one of Mr. Mueller’s prosecutors, Brandon L. Van Grack, in charge of a revamped FARA unit, declaring that the foreign lobbying disclosure act was “increasingly an enforcement priority.”

How far the prosecutors can push the once-obscure, 81-year-old statute is an open question.

Critics claim that the statute is as vague as it is broad, a problem already evident in the case against Mr. Craig, a former White House counsel under President Barack Obama. Days before his trial was to begin, Judge Amy Berman Jackson of the United States District Court for the District of Columbia dismissed one of two counts of false statements against Mr. Craig, saying the language of the FARA statute was too ambiguous to justify it.

The department’s enforcement drive is also hampered by a vast exemption for lobbyists who are paid by foreign commercial entities, even though business leaders are often stand-ins for foreign government officials who will pay millions to lobbyists to promote their interests in the West.

On the other hand, prosecutors often have an advantage in the courtroom when FARA cases make it that far. Juries are typically unsympathetic to consultants, lobbyists and lawyers who enrich themselves by working for a foreign power but hide their work from their own government. “It is hard to feel sorry for that cohort of people,” said Mr. Sanderson, the defense lawyer.

Consider the most recent case: the prosecution of Bijan Kian, who was accused of failing to disclose lobbying work for the Turkish government. Mr. Kian is a former business partner of Mr. Flynn, the former national security adviser who is awaiting sentencing on charges of filing false documents to Justice Department officials about the Turkish lobbying work, as well as lying to F.B.I. investigators about a different matter.

The federal judge who presided over the trial complained that the evidence against Mr. Kian, who also goes by the name Bijan Rafiekian, was “very, very circumstantial.”

Jurors nevertheless deliberated only five hours before finding him guilty last month of working as an unregistered foreign agent and conspiring to violate FARA, including by submitting false documents. Whether the judge upholds that verdict or throws it out will help define the legal parameters of the department’s new enforcement effort.

Mr. Craig’s trial will focus on a now familiar narrative of how Mr. Manafort led a far-flung effort to burnish the reputation of Viktor F. Yanukovych, who served as Ukraine’s president from 2010 to 2014. Mr. Manafort is now serving a seven-and-a-half-year prison term for conspiracy and financial crimes, including some stemming from that work.

According to the indictment charging Mr. Craig, he wrote a memo for his own files stating that the evidence of Ms. Tymoshenko’s criminal intent was “virtually nonexistent.” But the report he spearheaded found that the evidence presented at her trial supported the conviction that led to her imprisonment.

The reaction of American journalists to the Skadden Arps report was of intense interest to Mr. Manafort, to public relations officials hired to spin the report’s conclusions, and to Mr. Craig, prosecutors say. Following a carefully calculated news media strategy, Mr. Craig delivered an advance copy to The New York Times and volunteered to be interviewed by Times reporters, court filings show.

After the report’s publication in December 2012, Justice officials asked Mr. Craig a series of questions, including how much the law firm had been paid and whether the firm’s lawyers had discussed it with journalists.

Mr. Craig insisted that he had discussed the document with journalists only after it had become public and purely to “correct misinformation,” according to court filings. He did not indicate that the law firm had been paid more than $4 million by a Ukrainian oligarch, whose funds were routed through offshore accounts, disclosing only a fraction of the firm’s payments, prosecutors claim.

Although Mr. Craig was well aware of FARA’s requirements, prosecutors say, he misled the Justice Department officials because he did not want to limit his future career prospects by registering as a foreign agent. They claim he repeated some of his misleading statements to the special counsel’s team, as well.

The government’s witness list includes Mr. Craig’s own former law partners. In January, the firm agreed to pay the Justice Department $4,657,568.91 to settle an investigation into FARA violations.

That amount represents precisely what it was paid for its Ukraine report.