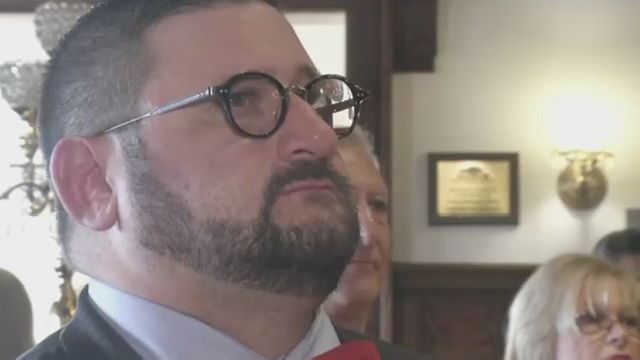 When NY1 first revealed that lawyer Richard Luthmann impersonated Staten Island politicians on Facebook, he told us he was only engaging in "dirty tricks."

Social media dirty trick…or is it a crime? Richard Luthmann is at the center of this question, as he’s indicted after @NY1 reporting that outed him as the man behind several phony Facebook pages last summer. pic.twitter.com/RfqJgKs3wx

The investigation began after NY1 reported that Luthmann created and oversaw Facebook pages made to look like the actual pages of elected officials and candidates, like Staten Island District Attorney Michael McMahon and Councilwoman Debi Rose.

"I felt threatened," Rose said. "I did at times question my safety."

One of Luthmann’s most notable deceptions is a focus of the indictment: a page created in the name of Janine Materna, who mounted a primary challenge against Republican Assemblyman Ron Castorina two years ago.

"Is there a picture of her with Hillary?" Luthmann asked.

"i’m looking for one," Castorina answered.

A doctored image of Clinton standing with Materna later was posted with the statement, "On September 13" — the date of the GOP primary —   "we will make HERstory!" It was a message intended to turn off Republican voters.

The charges come amid rising concern about social media being used to mislead voters. Experts say it is the first criminal case of its kind in the state.

"As we progress forward quite frankly into 2019, 2020, the question will be, Are they going to be still dirty tricks or are they just going to become tricks because more and more people utilize them?" Sorrentino said.

The Materna page did have a disclaimer that said, "This is an UNOFFICIAL FAN PAGE." But the special prosecutor says that was only added after Luthmann realized people were on to him.

Luthmann is due back in court February 13.