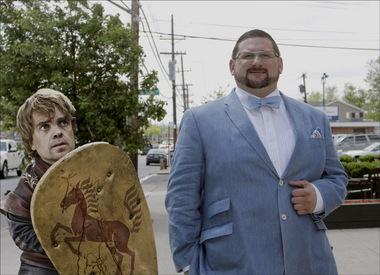 STATEN ISLAND, N.Y. — At District Attorney Michael E. McMahon’s request, a Staten Island justice has appointed a special prosecutor to probe allegations of criminal impersonation, forgery and falsifying business records made by one or more persons against an individual, who sources have identified as controversial lawyer Richard Luthmann.

According to media reports, Luthmann has been accused of creating false Facebook pages attacking McMahon and other political figures.

The order does not specifically name Luthmann as the target.

The order cites “a potential grand-jury investigation into possible criminal activity,” and empowers special prosecutor Thomas A. Tormey Jr. to explore “allegations of violations of criminal impersonation in the second degree, forgery in the third degree and falsifying business records in the second degree.”

All of those charges are misdemeanors.

McMahon’s application for the special prosecutor, originally filed in 2016, has been sealed.

In a Facebook post Monday night, Luthmann, who once challenged a lawsuit foe to a trial by combat, took a swipe at McMahon and his wife, Justice Judith N. McMahon, Staten Island’s administrative judge for civil matters.

He wrote: “Richmond County District Attorney whose wife, the County’s Administrative Justice, recused herself earlier today in one of my cases after the earlier NY1 article alleged involvement in a fake Facebook page – THE FIRST TIME – after a steady two years of denied applications – is trying to set up a Special Prosecutor against me from an adjoining county to bring baseless ‘harassment’ or ‘identity theft’ charges. Any alleged activity is denied for the reasons previously stated. Moreover, any alleged activity is, arguendo, POLITICAL in nature and is PROTECTED SPEECH, at least in America and New York.”

Luthmann has been in the news in recent days after taking to social media to attack former South Shore Assembly candidate Janine Materna following reports that he allegedly was the administrator of a Facebook page that misrepresented her. It is not clear if that page is among the allegations Tormey will be probing.

Tormey is a Manhattan-based criminal defense attorney and former Manhattan prosecutor. He has been assigned as a special prosecutor this year in a number of other cases on Staten Island.

Luthmann also declined comment and referred a reporter to his attorney Joseph Sorrentino.

“At this point, I have no comment pending further developments,” said Sorrentino.