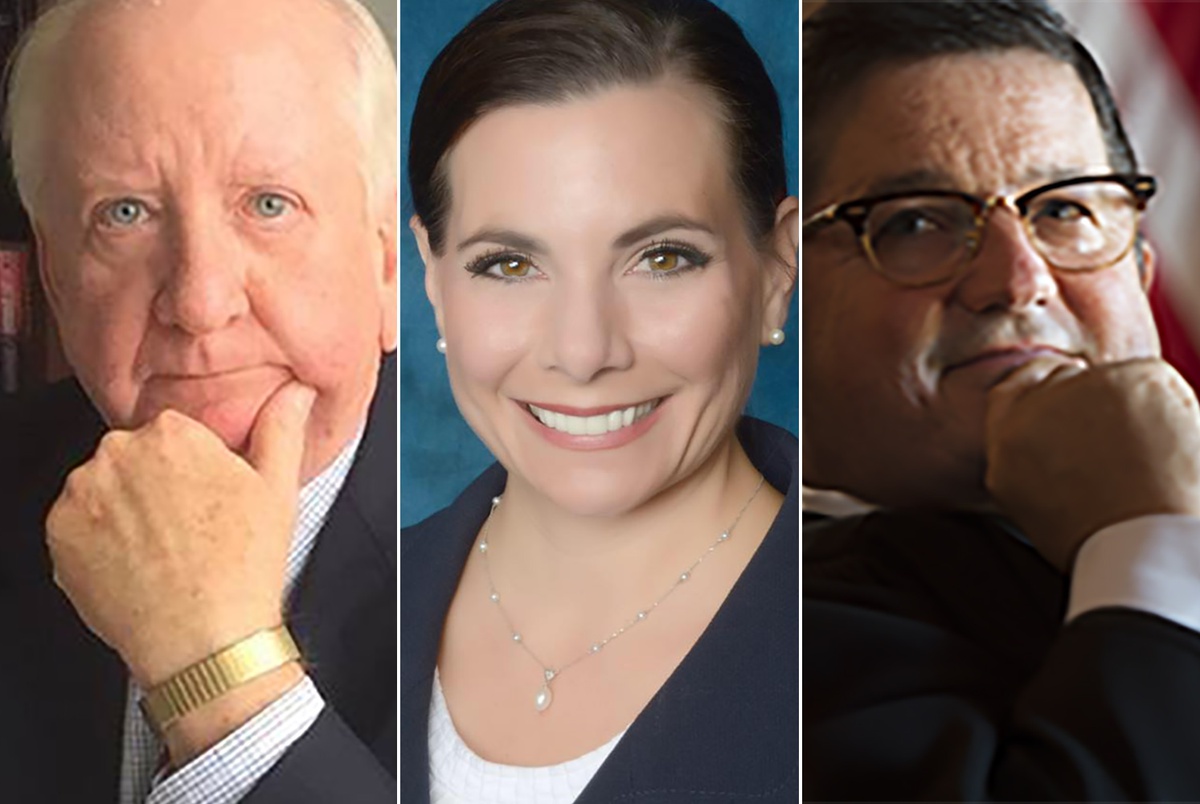 Elsa Alcala has made a name for herself on the Texas Court of Criminal Appeals.

Last fiscal year, the Republican judge wrote by far more opinions than any of the eight other judges on the court, and she has become known during her nearly seven-year tenure for her fiery dissents criticizing the death penalty.

Now she’s stepping down, and three Republican candidates want to take her seat on the state’s highest appellate court for criminal cases. With no Democrats running for the position, the primary winner will almost certainly land a spot on the court next January (one Libertarian is also running).

Bexar County Assistant District Attorney Jay Brandon, District Judge Michelle Slaughter of Galveston County and  District Judge Dib Waldrip of Comal County are fighting for the chance at the court. Their experience levels vary in terms of criminal appellate, prosecutorial and defense work, but these races — which generally bring in little campaign money and even less attention — are often won on different terms.

Endorsements from conservative groups and how your name looks on the ballot can be key factors in deciding a race.

“Either [people] don’t vote in the race, or they vote based on familiar-sounding names,” Alcala said. “It’s not an educated vote in many instances.”

It’s largely why she’s leaving the court. Alcala was appointed to her position in 2011 by former Gov. Rick Perry, then elected to a six-year term the next year. When she announced in 2016 that she wouldn’t run again, she said a main reason was the “random and unreliable” results in partisan judicial elections.

Jani Maselli Wood, a former Republican candidate for the court who handles appellate cases for the Harris County Public Defender’s Office, said Republican voters will also head to the polls with sheets from conservative groups that propose selections across the ballot. She added that Slaughter has gotten most of those endorsements, including the backing of Empower Texans, Texas Right to Life and numerous local Tea Party groups.

The Texas Court of Criminal Appeals is the last resort for all criminal appeals in the state, and it handles all death penalty reviews — where Judge Alcala’s absence will be felt the most.

She has written numerous opinions questioning the constitutionality of the state’s death penalty — including one from June 2016 where she mentioned it might be time for the court to look at whether societal standards have evolved past a point where capital punishment is acceptable.

Of the three candidates hoping to replace her, Waldrip appeared to venture the closest to Alcala’s sentiment, saying he believed in the death penalty but not in the way it’s currently implemented. He said that with costly, sometimes decades-long appeals, the punishment is no longer a deterrent to would-be murderers. A 19-year-old like the Parkland, Florida, school shooter, for example, probably wouldn’t view execution as a threat if he is on death row for 10 to 20 years beforehand.

“He’s doubled his life span,” Waldrip said. “I think the death penalty has to have a broader, more beneficial societal effect, or we’re not better than that one individual who killed somebody else.”

One way to do that, he said, would be for the Legislature to create a review panel to look at evidence before a prosecutor could seek the death penalty. That could give more credibility to death sentences and shorten appeals.

“We’re spending millions and millions of dollars in post-conviction litigation that we could be sending kids to college on,” he said.

Waldrip and Brandon both said they were happy there have been fewer new death sentences since the alternate punishment of life without parole became an option in 2005, and Slaughter mentioned the option as a safeguard against the death penalty. But she emphasized that changes to death penalty law need to come from the Texas Legislature, not the courts.

“As a judge, it’s not my place to change what the law is other than to maybe suggest reforms or ideas that I may have to the legislators,” Slaughter said. “It’s up to them whether the law actually changes.”

Brandon also said judges are obligated to follow the law and that legally imposed death sentences need to be upheld, but he agreed with Alcala that constitutional arguments about racial biases and lengthy appeals should be reviewed.

Alcala said ideally a Court of Criminal Appeals judge would have previous experience working with criminal appeals, trial courts and the death penalty.

Wood, who also worked as an attorney for the appellate court in the 1990s, said that because the court is so far removed from the petitioners, it’s important for judges to have represented a person in the law before. Otherwise, she said, the cases can become faceless and easy to dehumanize.

Brandon, a 64-year-old assistant district attorney in Bexar County, led the county’s conviction integrity unit, which looks into possible wrongful convictions. Before becoming a prosecutor, he was a private criminal defense lawyer and served a short stint as a Court of Criminal Appeals briefing attorney in the 1980s. He’s the only candidate with defense experience, and he has represented death row inmates in their appeals to the court.

Though he doesn’t have any judicial experience, he said he was immersed in reviewing petitions with the conviction integrity unit, similar to the petitions the court reviews for appeals. His background has earned him endorsements from the Houston Chronicle and Dallas Morning News editorial boards.

“My whole career has kind of been aimed at serving on this court,” Brandon said.

Waldrip, 54, earned his law degree while working as a police officer in New Braunfels, worked for lower Texas appeals courts and handled appellate cases as the Comal County district attorney. He also has successfully tried more than 100 felony cases before a jury, he said, which he had to maintain in courts of appeals.

“A criminal appeal is a review of the trial work of lawyers and judges — neither of my opponents have ever done the trial work,” he said.

Brandon’s campaign website said when he first joined the district attorney’s office, he did “enough jury trials to know I could try a case,” then moved onto appellate work.

Brandon and Waldrip — both state-certified in criminal law — have criticized Slaughter’s lack of criminal appellate experience, but Slaughter, 43, pointed out that she interned for a Texas appellate court in law school. She also noted that she has presided over 100 felony criminal jury trials and has a wider range of experience than her opponents. She previously worked with international civil law firms covering complex issues in courts in Texas and out of state, she said.

“Criminal law is actually very straightforward,” she said. “Having had that very complex legal experience, I think, is a huge benefit because it allows me to really cut through to the key issues.”

She mentioned the current criminal case against Attorney General Ken Paxton, saying having a judge with civil experience on the court would help with the complexities that have arisen with attorney fees and special prosecutors.

Alcala is the only judge voluntarily leaving the Court of Criminal Appeals after this election, but Presiding Judge Sharon Keller is up for re-election, and her Republican primary opponent David Bridges has knocked her for ethical controversies. Most famously, Keller rejected a 2007 final death penalty appeal because it was filed a few minutes past the deadline, insisting “we close at five.” Keller said the controversy is behind her, and she has won re-election since. Judge Barbara Hervey’s term is also expiring, but the Republican is running uncontested for re-election.

Alcala said with her leaving and two new judges who came to the court in 2017, the bench is in a state of flux.

“I never know on any given case how it’s going to come out,” she said. “You just got a lot of new judges who are trying to figure out where they’re going to land.”