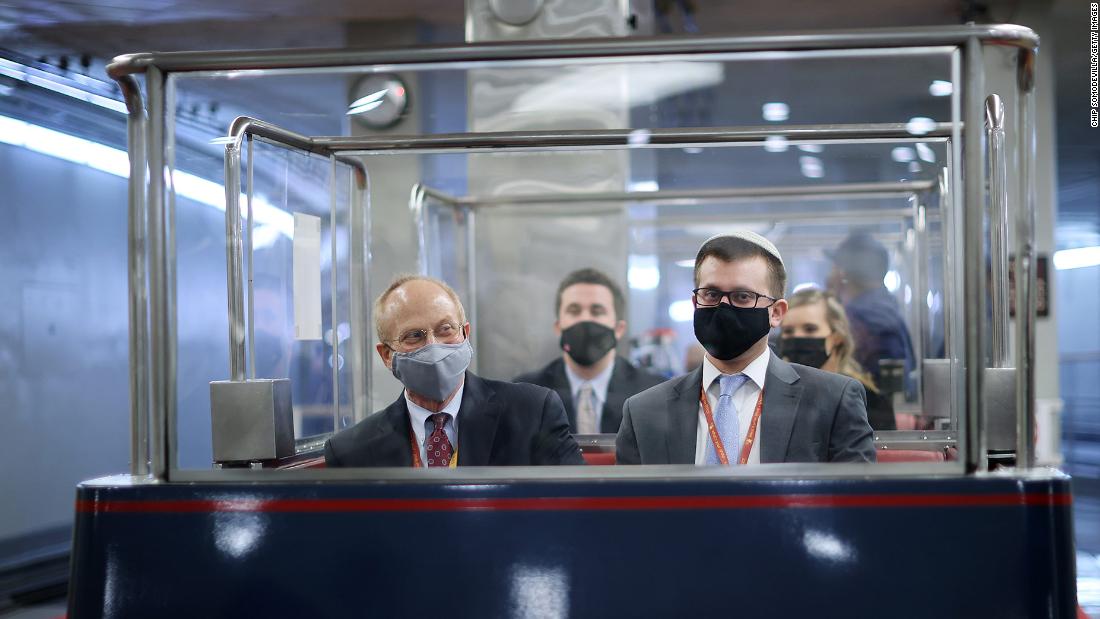 After two days of House impeachment managers presenting a case arguing that Trump incited the insurrectionists and failed to act to stop the riot as it unfolded — using new and disturbing images of the attack to drive home their message — Trump’s team is expected to respond that the Democrats’ presentation glorified violence and that Trump’s speech urging his supporters to “fight” was figurative and protected by the First Amendment.
LIVE UPDATES – Trump’s second impeachment trial: Day 4
“When you use the word ‘fight’ most of the times during the case, it’s clear he’s talking about legislators fighting for our rights, people fighting to advocate, and you know everyone likes to overlook the word ‘peacefully’ in there,” Trump attorney David Schoen told reporters on Thursday.
The presentation is sure to be shorter than the Democrats’ two-day argument. Schoen told reporters Thursday that Trump’s team expected to present for roughly three to four hours on Friday, out of the 16 hours the team has available. Trump’s lawyers are expected to wrap up on Friday and not use a second day to present their case.
The quick presentation is another sign that the goal of Trump’s team Friday is simple: Do no harm. Unlike the Democratic managers, who hoped to win over Republican senators with their presentation, Trump’s lawyers expect to already have the votes they need for acquittal, as most Republican senators are saying they will vote to acquit Trump because they believe the trial is unconstitutional.
At the same time, the Trump defense presentation Friday could play a key role in just how many Republican senators vote that Trump is guilty, after six voted that the trial itself was constitutional on Tuesday.
After the Trump team wraps up, the Senate could move onto senators’ written questions to the legal teams as soon as Friday. Senators are predicting that the trial could conclude as early as Saturday if they move into closing arguments without any witnesses, though senior aides on the House impeachment team still would not say Friday morning whether they intend to call witnesses.
The aides said the managers are prepared to move into the question-and-answer session as soon as Friday, though that would depend on how long Trump’s lawyers take.
In another sign that things are moving quickly — and that senators may get their chance to question each side Friday evening — GOP and Democratic senators have been asked to submit their proposed questions to their respective leaders. The idea among the leaders is to avoid duplication. Some senators are working together on questions.
The expectation is that the question period won’t take the four hours that are allotted.
While leadership is coordinating ahead of the Q&A session, senators can ask also questions on the floor without prior leadership approval and can do so on the fly.
Following Tuesday’s rambling argument from Trump attorney Bruce Castor — which was panned by Republican senators and angered Trump — Schoen is expected to take the lead for arguments Friday. All four Trump attorneys — Schoen, Castor, Michael van der Veen and William Brennan — are expected to speak.
The team plans to use video, just as the Democrats did, including showing Democratic leaders using similar language to Trump, according to a source close to the former President’s legal team. That includes now-Senate Majority Leader Chuck Schumer, a New York Democrat, saying outside the US Supreme Court last year, “I want to tell you, Gorsuch, I want to tell you, Kavanaugh, you have released the whirlwind, and you will pay the price. You won’t know what hit you if you go forward with these awful decisions,” referring to Supreme Court Justices Neil Gorsuch and Brett Kavanaugh.
Of course, Schumer’s comments did not lead to any violence or an attempt to overturn the results of an election. But the Trump team plans to argue that Trump never intended for the protesters at his rally to take over the Capitol.
Trump’s lawyers are also expected to focus on his comments at the January 6 speech telling supports to “peacefully and patriotically” protest, in addition to saying they should “fight like hell.”
Several key GOP senators, including Lindsey Graham of South Carolina, Ted Cruz of Texas and Mike Lee of Utah, who are serving as jurors in the impeachment trial met with Trump’s attorneys after the impeachment managers’ presentation concluded Thursday afternoon.
“We were discussing their legal strategy and sharing our thoughts,” Cruz said after the meeting. “I think the end result of this impeachment trial is crystal clear to everybody. … Every person in the Senate chamber understands that there are not the votes to convict, nor should there be.”
This story and headline have been updated with additional developments Friday.