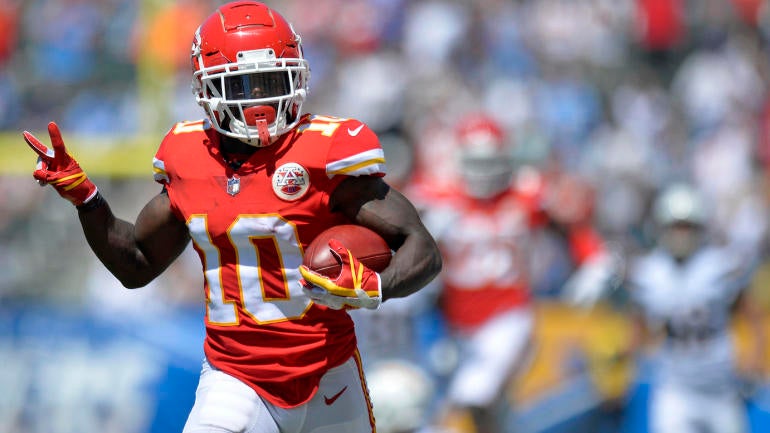 Chiefs wide receiver Tyreek Hill denies having any involvement in the alleged abuse that happened against his 3-year-old son, according to a letter from his attorney to the NFL.

Although Hill has kept quiet about the situation ever since police started investigating him back in March, attorney N. Trey Pettlon wrote a letter to the NFL this week that gave Hill’s side of the story. In the letter, which was obtained by ESPN, not only does Pettlon claim that Hill has never abused his son, but he also pinned the blame for the recent abuse on Hill’s fiancee, Crystal Espinal.

Pettlon started off the letter by pointing out that police didn’t find any evidence that Hill had harmed his son during their investigation, which ran for nearly six weeks.

“[Hill’s son] was examined and released without any indication that the accident that broke his arm was caused by Tyreek or contributed to by Tyreek, or that Tyreek was even somehow involved,” Nettlon wrote in the letter.

After the investigation into Hill was complete, Johnson County District Attorney Stephen Howe decided not to charge the Chiefs receiver with a crime, however, Howe did make it clear that his office was absolutely convinced that a crime occurred at Hill’s house. The reason Howe’s office didn’t file any charges is because, based on the available evidence, authorities simply don’t know who committed the crime: Hill or Espinal.

Although the criminal investigation into Hill was closed on April 24, it was reopened less than 24 hours later after a KCTV in Kansas City released a secret recording. In that recording, which Hill’s lawyer confirmed as authentic, the Chiefs receiver is heard calling his fiancee a “b–ch.”

The comment toward Espinal came after she said that their son was terrified of Hill.

“You need to be terrified of me, too, b–ch,” Hill is heard saying in the recording.

Nettlon said that Hill made the “inexcusable” comment out of “frustration.”

“Instead of denying that his son was terrified of him a second time, something that bothered him a great deal, he became frustrated and said she should be terrified too,” Nettlon wrote. “That comment is inexcusable, of course, and he wouldn’t ask me to defend that here. That comment is also inconsistent with Tyreek’s conversations with Ms. Espinal over the past several months.”

During the 11-minute recording, Espinal made multiple claims against Hill, saying that Hill regularly punches their son in the chest, something that Hill’s lawyer denied.

“[Hill] categorically denies he has ever ‘punched’ his son in the chest or anywhere on his body, or otherwise touched him in the chest in a mean-spirited manner or as a form of discipline,” Nettlon wrote. “There have been occasions when Tyreek has tapped his son gently on the chest with his fingers, while his son was crying and said, ‘man up, buddy’ or ‘don’t cry, my man.’ He has said that in a calm voice trying to redirect him. He’s never used his fist. He certainly doesn’t do it roughly. He is trying to calm his son down so he can stop crying. He is not hurting him or doing anything to make him cry more.”

Although the Johnson County District Attorney couldn’t decide who to charge, Hill’s camp insists that it’s Espinal who’s been the one abusing their son. Here’s an alleged text between and Hill and Espinal that was included in the letter to the NFL:

Tyreek: “Crystal you know I didn’t cause any bruising or harm to [our son.] But for some reason I still may be charged.”

Crystal: “I know you didn’t. I did. I hurt [our son.] I’m the one that did it. I was hurt and mad at you so I blamed you for everything.”

The leaked recording paints a much different picture than the text above, which is likely one reason why authorities haven’t been able to figure out who to charge in the case.

In the mean time, Hill has been indefinitely banned from all team activities with the Chiefs and likely won’t be able to return until the NFL completes its investigation into the case.