Years ago, the prisoner filed a lawsuit accusing three jail officials of bringing him into a classroom inside the criminal justice center at 201 Poplar in Memphis, then punching and kicking him for no reason.

He asked for $1 million in damages. And now the case was going to a civil trial — with the prisoner acting as his own attorney.

So inside the federal courtroom, the man in the light blue prison scrubs was questioning the officers in the crisp dark uniforms, challenging the official account that he, the prisoner, had provoked them into wrestling him to the ground and that they didn’t hit him.

“Did I come into the room and swing at you?” the prisoner asked one of the officers.

“Not at first,” the officer said. He said that a moment later, the prisoner came toward him with a closed fist, which prompted the jailer to grab the prisoner’s legs and take him down to the floor.

“So you never swung on me, never kicked me, never hit me?” the prisoner asked.

“No sir,” said the officer. 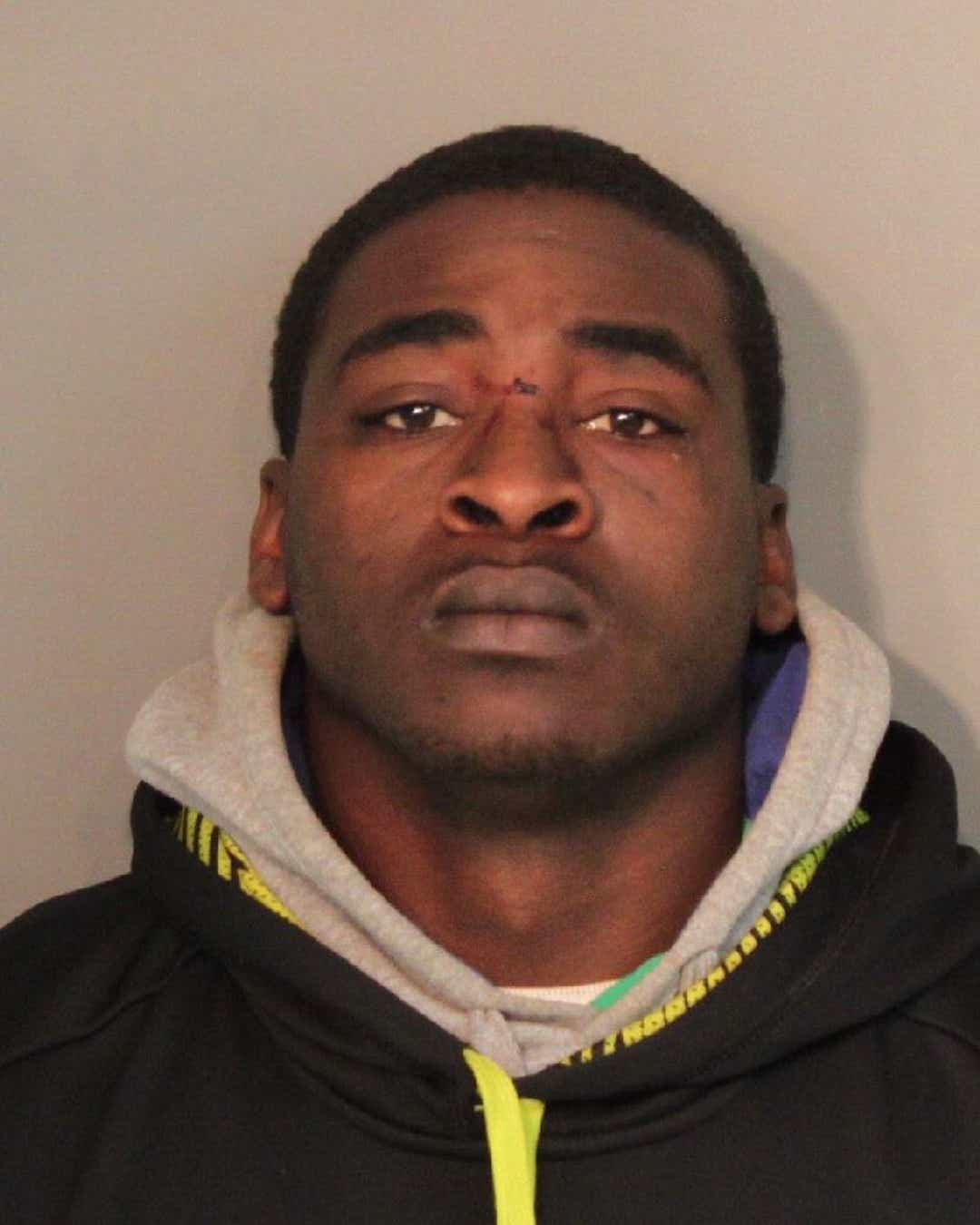 This unusual interview between prisoner Derek Rawlings Jr. and law enforcement official Garry Arnold was one of the notable moments in a civil trial this week as Rawlings sought monetary damages.

Rawlings was 22 years old  when he hand-wrote his original lawsuit, dated December 2014. He pursued the case for 4½ years, arriving at age 26 for the trial that took place Tuesday and Wednesday at the federal courthouse in Downtown Memphis.

Two corrections officers escorted Rawlings from a state prison and into the courtroom in chains. They freed his hands and left on his leg shackles. During quiet moments in the trial, he sat at a table alone, not far from the three law enforcement officers he had sued — Arnold, Kenneth Boykin and Keeley Gray — and two lawyers defending them.

By the time the case went to trial, the Shelby County government had already been dismissed and was not a party to the lawsuit, already reducing Rawlings’ chances of winning a big payout.

At the start of the trial, U.S. District Judge Thomas L. Parker told jurors the obvious: that the man in the jumpsuit with the words “TN Dept of Correction” stenciled on the back was a prison inmate.

“And he deserves a fair trial in this case,” Parker continued. “Is there anybody who would have difficulty giving Mr. Rawlings a fair hearing simply because he is incarcerated?” None of the jurors said yes.

The judge also discussed other factors that could improperly influence a jury, such as racial bias. Rawlings is African American, as are all three of the officers he accused of beating him.

Incarcerated people frequently file lawsuits complaining about sentences and prison conditions, said Tom Gould, the federal court clerk in Memphis. Most file these cases “pro se,” that is, without the help of a lawyer.

Gould formerly visited prisons as a legal aid volunteer, and encountered the work of “jailhouse lawyers,” prisoners who study the law and gain enough expertise to help others. “You could put it up against lawyers. Other than the fact that it’s a little scruffy looking, you wouldn’t know who wrote it.”

While many cases are frivolous, other jail lawsuits address serious wrongs, such as rapes inside the lockup, he said. That’s why the legal system takes these cases seriously.

Still, it’s extremely rare to see one of these pro se prisoner lawsuits make it all the way to a jury trial, Gould said. Most cases are dismissed on technicalities because the prisoner has trouble presenting a valid case.

Diving on the floor in court

At the start of the trial, Rawlings brought forward his only witness: himself.

He told the jury that a big fight had taken place between inmates and guards on the morning of Oct. 30, 2014, inside the F-pod at 201 Poplar. At the time, he said he was outside the pod, talking with an officer.

He said after the fight, members of the gang intelligence unit came to the area to talk with inmates.

Officers later testified that the intelligence unit is a special group of jail officials that uses inmate interviews to gather information about gang activity both inside and outside the lockup.

Rawlings said that when he was brought to a classroom inside the jail, he expected officers to question him about the big fight.

Instead, one of the officers punched him in the face, he said.

He asked the judge if he could stand up to demonstrate what happened next. The judge said yes, and Rawlings shuffled in his leg shackles to the front of the jury box.

“I fell like this onto the ground,” he said, and lay himself down, face-first. Some jurors immediately stood up to see him better.

In court, he got up quickly and said he took more punches and kicks on the ground, including a hard kick to the head that made him black out and left a knot on his face.

The court saw a photo of Rawlings with a big swelling under his eye. They also saw  jailers’ reports about the incident, which described the prisoner as the aggressor.

In testimony, officers said Rawlings was shouting curses and threatened an officer with a clenched fist, and that when officers wrestled him down, the right side of his face hit the floor. They denied striking him.

Rawlings put on a thin case, with no video evidence and no witnesses other than himself to support the story of the beating. Before the trial began, he told the judge he’d struggled with lockdowns at the prison and lack of access to the law library.

Later, he said he didn’t know how to get in touch with another inmate who could confirm his story. Though he said he got his GED in prison, he wasn’t used to legal work. “I’m new to this,” he said.

And attorneys representing the jailers attacked Rawlings’ credibility by pointing to his criminal history.

After his pretrial detention at 201 Poplar, where the alleged beating happened, Rawlings was transferred to the state prison at Whiteville, where he is serving an eight-year sentence on charges of aggravated robbery and being a felon in possession of a handgun.

Attorneys for the jailers presented gang intelligence documents that said he’s a member of the Vice Lords.

Rawlings insisted he’s not a Vice Lord. He said he’s actually a member of the Bloods. 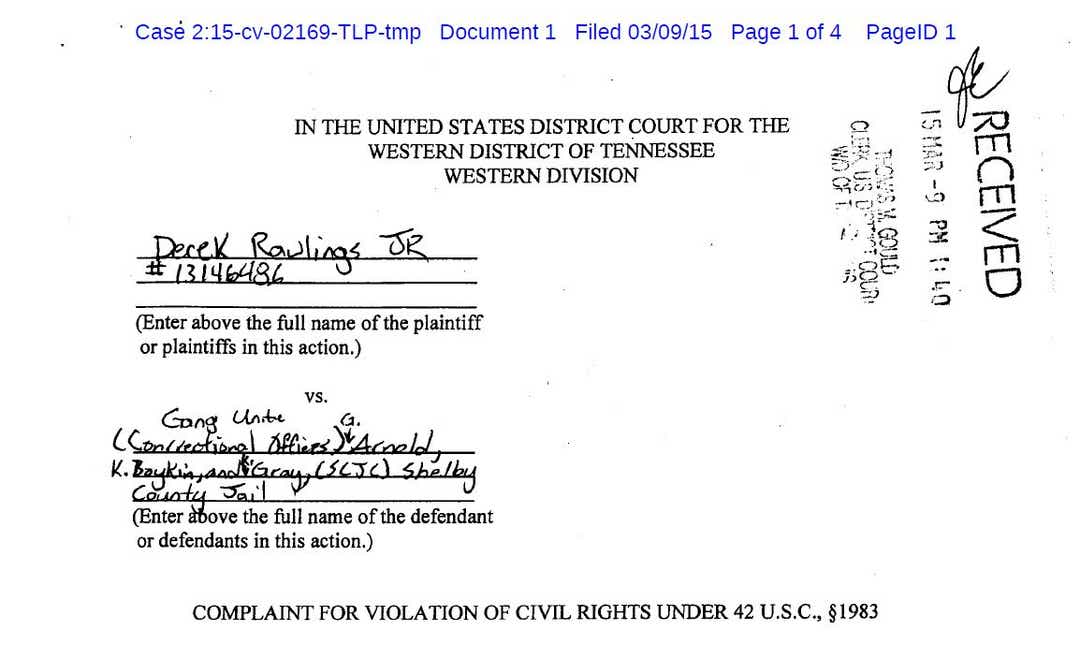 The verdict comes in

The judge told the jurors that the plaintiff in the civil lawsuit, Rawlings, had the burden of proving his case. If the evidence was 50-50, the jury would have to rule in favor of the officers.

In closing arguments Wednesday, an attorney for the jailers, Bruce D. Brooke, said Rawlings had failed to prove the officers did anything wrong.

Rawlings said he’d told the truth about the beating for years.

The jury of four women and six men soon reached a verdict, ruling against Rawlings and for the officers. The officers won’t have to pay any damages.

For now, Rawlings returns to Whiteville Correctional Facility, about 60 miles east of Memphis.

His sentence ends in July 2021. He might get out early — he’s scheduled for a parole hearing in April, a prison system spokeswoman said.

During the closing arguments, Brooke said Rawlings didn’t deserve to win. But he called Rawlings an intelligent man and acknowledged the unusual circumstances.

Investigative reporter Daniel Connolly welcomes tips and comments from the public. Reach him at 901-529-5296, daniel.connolly@commercialappeal.com, or on Twitter at @danielconnolly.