Women are quitting the practice of criminal law at a significantly higher rate than men, according to a new report by the Criminal Lawyers’ Association (CLA).

The report, entitled “The Retention of Women in the Private Practice of Criminal Law,” was released this past weekend at a CLA conference in London, Ont. It found low pay, lack of financial support for maternity leave and being treated differently than male peers by judges and court staff as some of the reasons so many women are leaving private practice of criminal law.

The report confirms what many had been reporting anecdotally for years, according to Breese Davies, vice-president of the CLA.

“We all had impressions that women were leaving criminal practice at a higher rate than men,” she said.

“But we never had any numbers to determine whether or not our impressions were real.” 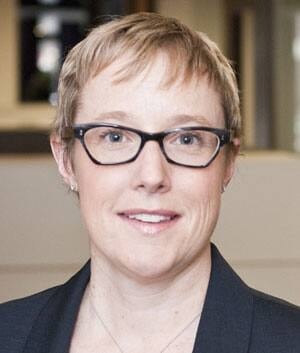 Breese Davies, a Toronto criminal lawyer and member of the Criminal Lawyers’ Association, said the report found ‘an enormous attrition rate’ of female criminal lawyers over a span of 10 years. (Phil Brown)

The study, authored by Natasha Madon, a postdoctoral research fellow from Griffith University in Brisbane, Australia and Anthony Doob, professor emeritus of criminology at the University of Toronto, examined statistics from Legal Aid Ontario and the Law Society of Upper Canada. They also set up five focus groups and surveyed 225 female criminal lawyers in Ontario.

They found many women dropped criminal law after five years and very few were still practising in the area after 10 years.

“Most shocking to me was, of the women who started doing criminal law in 1996, there were 47 of them. Eight years later, by 2004, only 13 of them were still doing a substantial amount of criminal law,” Davies said. “That is an enormous attrition rate.”

Sixty-one per cent of those surveyed reported they considered leaving because of low pay, long hours and challenges dealing with the Legal Aid system, a key source of funds for those in criminal law. Many also pointed to the financial burden of maintaining a practice and running an office during maternity leaves.

“It’s amazing that, given all those challenges, we have any women in criminal law,” said Indira Stewart, a Toronto defence lawyer who has been in practice for seven years. “It’s such an uphill battle. It’s such a tough field, even if you’re not a woman.”

Stewart, who has two young children, says many of the report’s findings ring true for her.

“The unpredictability of work hours, the logistical and financial challenges in taking a maternity leave and then having to completely rebuild your practice after returning. You really have to start from scratch after you’ve been gone,” she said.

“In my first maternity leave, I took less than four months, but even in that short time frame, clients’ matters have to proceed, their cases move along and they form a relationship with a new lawyer.”

The Law Society of Upper Canada has a parental leave program, but it’s very limited and requires applicants to pass a means test.

Many women also reported a lack of respect and being treated differently than male lawyers by court officers, police, crown attorneys and judges. One reported being called “little lady” repeatedly. Others said they were chastised for asking judges for time to pick up children from school whereas their male counterparts who made similar requests were not rebuked.

The study also found senior male lawyers tended to see women as students or assistants rather than fully qualified professionals. Only 22 per cent of those surveyed said they felt men and women were treated equally in the system.

“It’s a systemic problem that needs to be addressed,” Davies said.

The study also found that many women gave up private defence practice to take government jobs or become Crown prosecutors, who have guaranteed regular hours, no overhead and benefits, including maternity leaves.

Davies said it’s important that the practice of criminal law reflect the community and legal profession.

“Diversity matters,” she said. “We need diverse perspectives to make sure the law develops in step with social values. You do not want a group of homogenous people designing and developing laws.”

The report makes several recommendations on how to resolve some of the issues women face:

“There’s a lot to be done. These are pretty ambitious recommendations that touch a lot of areas of the criminal justice system,” Davies said.

She said she hopes to reassess the system in five years.

“Certainly in five years, I would hope that we’re not losing the number of women we’re losing now,” said Stewart.